Giving Him “Apple Pieces to Put in the Pan” 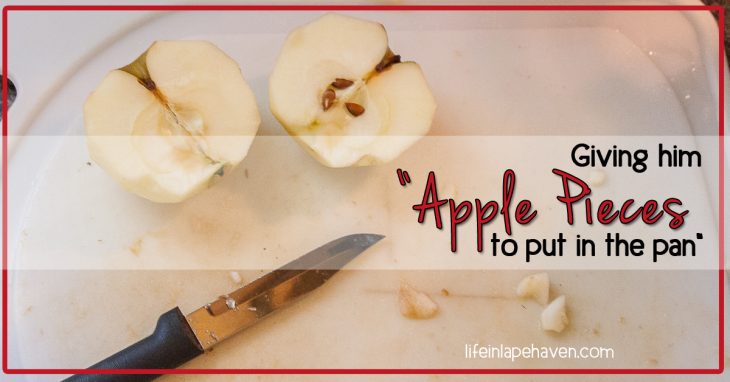 When Elijah started kindergarten and was at school for six hours or so every day, Josiah was getting something that he hadn’t really gotten to experience much in his life: hours with Mommy all to himself. He ate it up. And even though I missed Elijah, I also loved having time with my other little guy, too.

This post was first written during that precious time a few years ago when it was just Mommy and Josiah at home during the day. Here is a little look back: Finding himself without his constant playmate, Josiah has become my little shadow. He will play by himself off and on, but for the most part, he wants to be with Mommy. Generally that means “you play with me, Mommy?” and we do a puzzle or two, color, read books, or play cars, “duck ‘n goose,” or “ring a Rosie” until Mommy HAS to get something done. At that point, he’s either content to be alone, or he’s ready to be my “big helper boy.”

Josiah has discovered a love for vacuuming with me. He wants to be holding the handle the whole time which makes the process take FOREVER, but he’s also learned how helpful it is for him to move the chairs out of my way or pick up his toys really quickly. The other day I got smart and finally pulled out our older vacuum, the one where we can only use it with the attachments. He vacuumed with that thing while I used the good one, and I was able to move a lot quicker while he helped out! 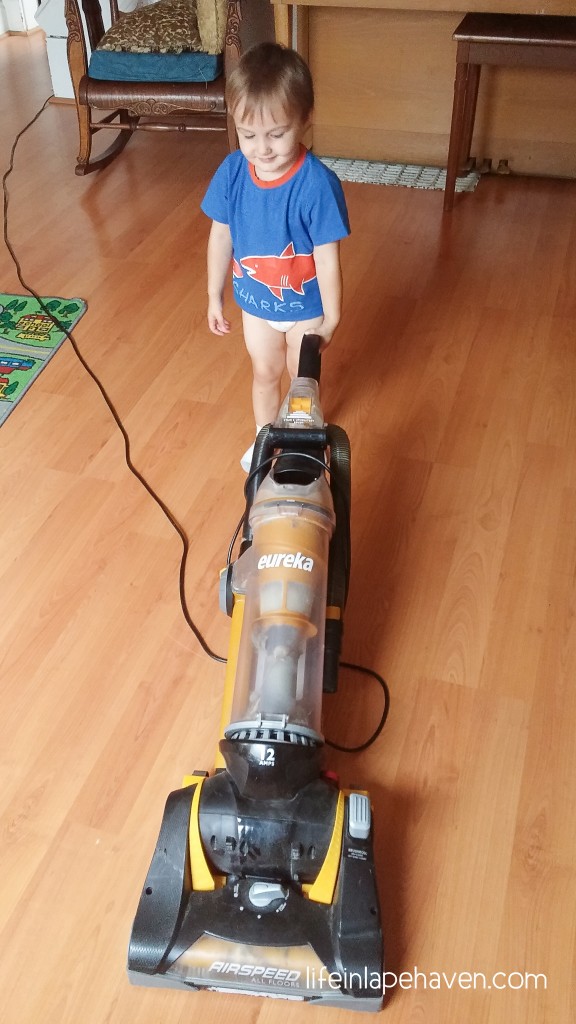 The other task he loves is unloading and loading the dishwasher. He gets super excited when he can stack the plates or the bowls. He is so proud of being “strong” enough to lift them (with Mommy’s very close supervision). He really thrives on being a part.

That’s why earlier this week, he insisted on being my “big helper boy” as I made homemade applesauce. At first I was leaning toward, “Go color” and “Where are your Legos?” or anything that would keep him occupied long enough for me to peel and chop up a large bucketful of dropped apples from my grandparents. I’d had them for a few days, just sitting on the counter, and I knew I had to use them, or I wouldn’t at all.

However, as soon as I was all set up, ready with my paring knife, cutting board, and rinsed apples, there he was, dragging a kitchen chair across the room to the counter. Realizing that having him nearby would be easier than having to keep stepping away from my task to check on him, I relented and let him stand beside me. He even had to have his apron since Mommy had hers.

Before long he was “oohing” and “ewwing” as I trimmed off the bad parts of the apples as I peeled them, and he was utterly fascinated with the couple of worms we found still residing in an apple or two. However, with each enthralled study of the apples, he leaned more and more on my arm, getting closer and closer to the knife in my hands.

So I brought out the big guns – my phone. With the offer of playing a puzzle on Mommy’s phone, while still standing on the chair beside me, he was with me but safer, and I could move a little faster. While I peeled, he slid digital puzzle pieces together to form random animals.

That’s when he started his conversation about the zoo. He knows we have a zoo trip planned in the next couple of weeks, so every animal he completed, he talked about seeing it at the zoo.

And this was our conversation for several animals. He likes to ask the “Do you like? I like/don’t like” questions with explanations for why he likes or doesn’t like something. Generally, he didn’t like animals that he might think “should” be scary.

Hmmm…“Well, no. We won’t see any dinosaurs. They aren’t at the zoo. There aren’t any dinosaurs anymore. They’re all gone.”

Not knowing any other way to say it, I just went for it, “Well, they all died.”

Josiah is really good at being dejected. He’s perfected his show of disappointment with a very adorable, heartfelt, “Awwww,” complete with his head down. Learning that dinosaurs were dead elicited that response and a frown.

Then he was back at his game. “When I go to dee zoo, I see the bird.”(Ostrich). Then he grinned at me with such delight, “They not die!”

I smiled and affirmed, “Nope. They didn’t die.”

“Nope. They not die,” he echoed happily. 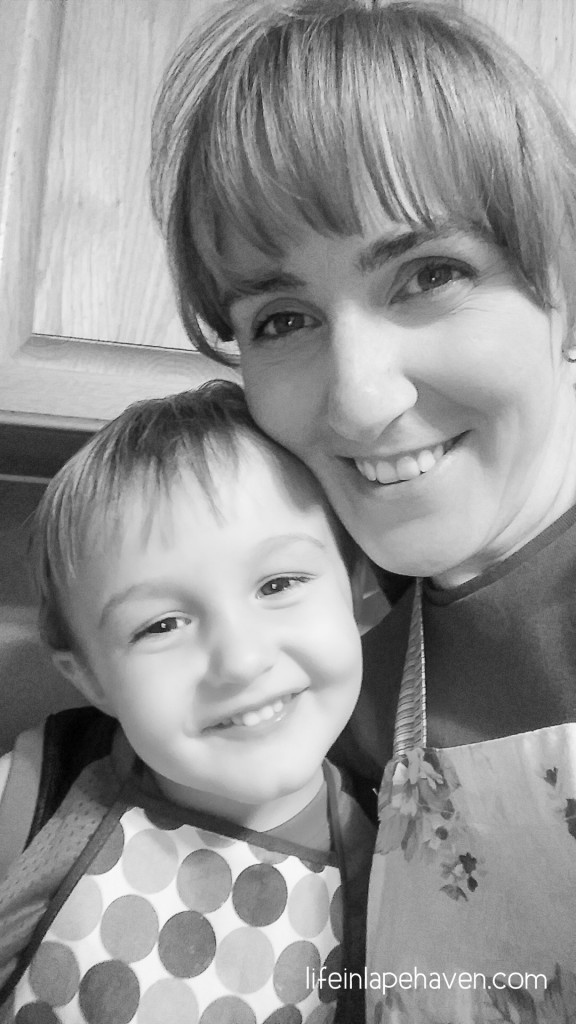 In that moment, I wanted to freeze time and just keep him right there with me, little and sweet and innocent. What a funny moment that I might have missed by sending him to play in the other room!

Smiling, I finished cleaning the apples and prepared to start the chopping. When I moved the cutting board and apples closer to the stove, to be near to the pan, Josiah was on it, moving his chair to right in front of the stove.

Again, I hesitated, but he was being so good and wanting to help, so I decided to let him put the chopped apple pieces into the waiting stock pot (since the stove wasn’t on). Being left-handed, I could put him to my right, chop up the apples, then slide them over to the right side, “his” side, of the cutting board, so he could grab them. 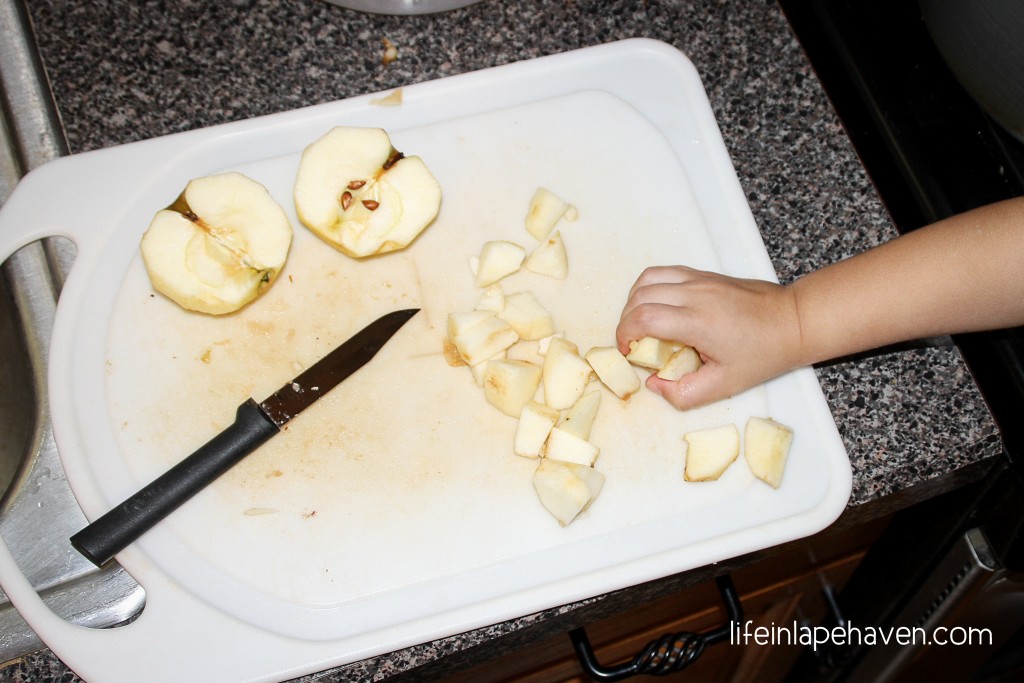 Josiah had so much fun picking up the pieces, one at a time mostly, and dropping them carefully into the pan. He didn’t try to eat them or play around. He was very intent on helping Mommy. At first, we counted them as he put them in, up to 20, a couple times, then we worked in silence for a while.

As I diced up another apple, I heard him say softly and so very sweetly, “Thank you for giving me apple pieces to put in dee pan, Mommy.”

I stopped cutting and asked him what he had said, to make sure I’d heard correctly.

He repeated it, “Thank you for giving me apple pieces to put in dee pan.”

With a full heart, I told him he was welcome, then leaned over for a kiss. He grinned all over himself, and I was caught again with the thought that I almost sent him away. I almost missed this. 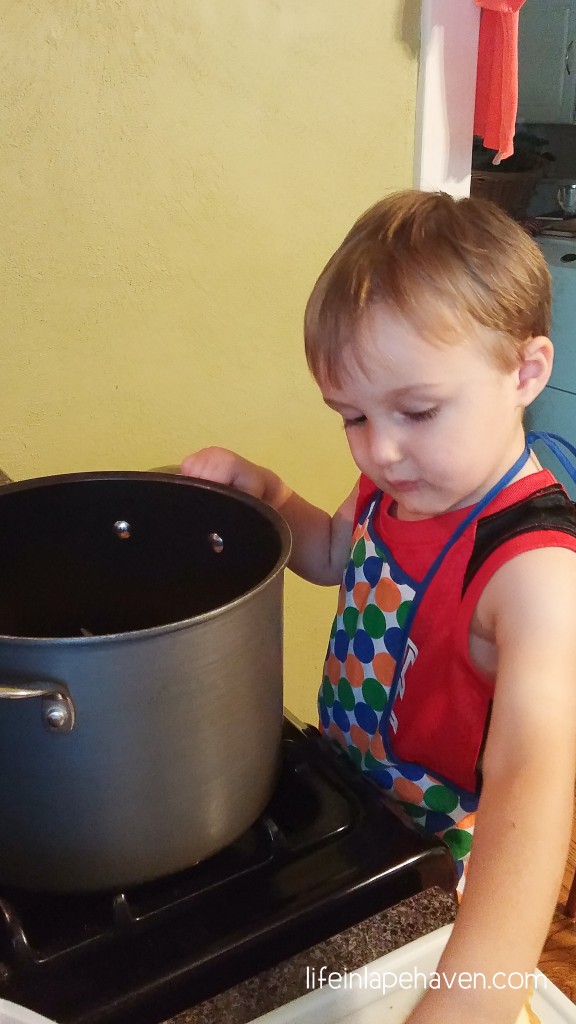 And he was so appreciative that Mommy was letting him help. He was grateful for the “apple pieces to put in dee pan” just so he could be with me.

I hope I never forget his sweet voice or delighted grin, those chubby fingers plucking up chunks of apples and tossing them joyfully into a big stockpot. I never want to miss an opportunity to let him be with me (within reason), help me (when he feasibly can), talk to me (so we can bond over dead dinosaurs and not-dead ostriches).

On my own, I might have finished my task much quicker, moved onto my next to-do item, and he would have been good playing with his toys alone. However, the time I could have saved would have cost me precious memories. Him, too. Together we now have another moment to store away and cherish, filling up our love banks just like those little apple chunks filled the pan.

It turned out to be really tasty applesauce. It might have been done sooner had I done it alone, but I can guarantee you that it wouldn’t have been nearly as delicious without those little hands that helped. I may never have applesauce again without remembering that day.

I pray it always reminds me to make sure he has apple pieces to put in the pan. 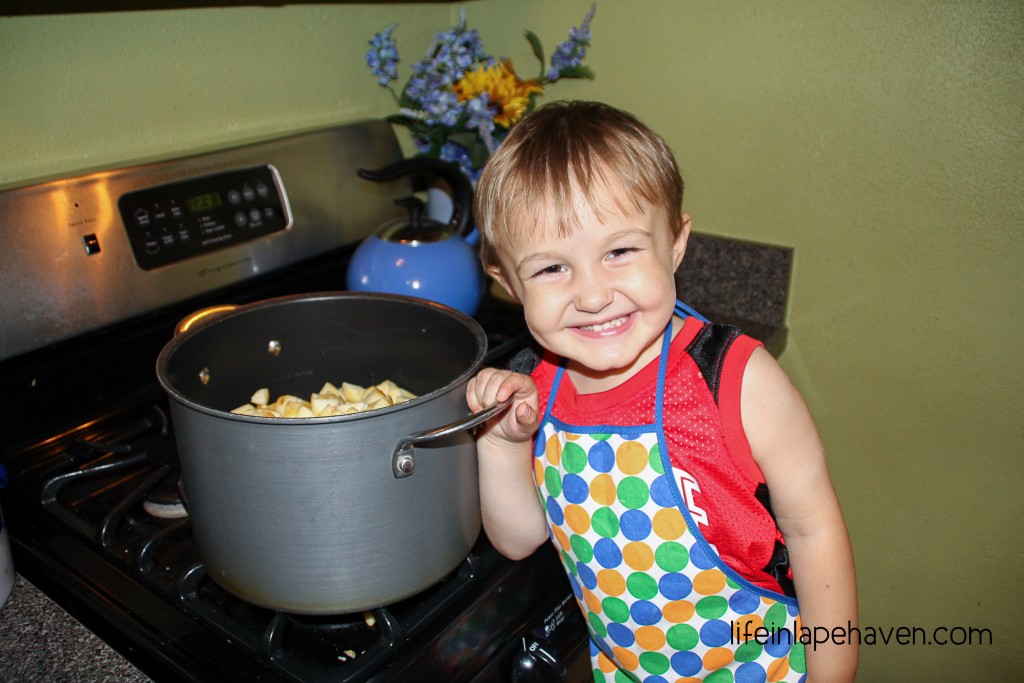 The Last  Time He Called Me, “Mommy”