Elijah and the Clean Water 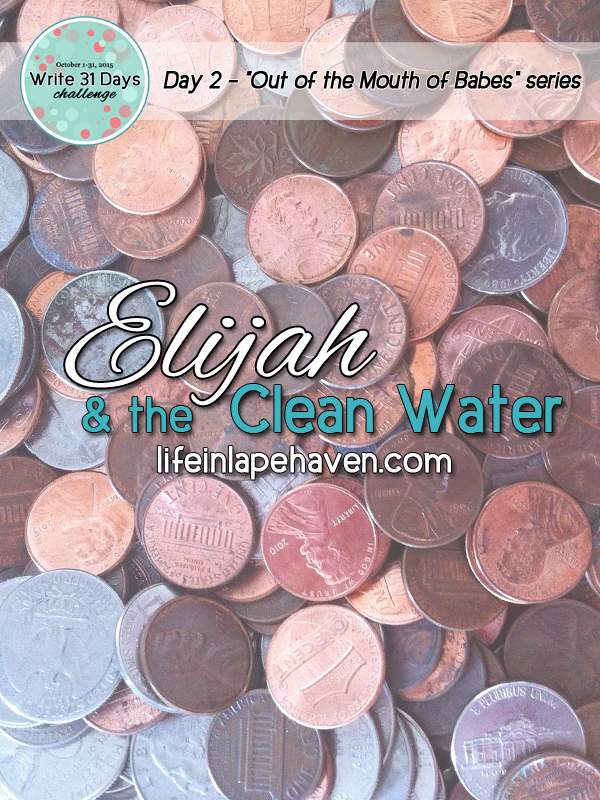 One day last summer, then-4-year-old Elijah was being especially whiney and demanding, complaining about things that he “needed,” such as new toys. Being a stubborn child, he can be rather argumentative when he thinks he’s right (I can’t imagine where he gets that!), so I decided the best way to deal with it was to show him what real “need” was about.

A quick search through YouTube brought me to a video from World Vision that focused on a young woman in rural Africa and her daily trek to get clean water for her family to drink.

After watching the video with him, we talked about how we are very rich compared to so many people in the world, and while he was busy complaining about getting more “stuff,” some children just want the very basic necessities to survive, like food and water. He initially suggested that they just go to the store and get some, but then I reminded him of how poor they were and how that isn’t an option for them as it is for us.

Elijah has always been a generous boy. He loves giving people gifts he’s made – cards, crafts, etc. – for no reason at all. His kindergarten teacher has received something from him nearly every day this year, even though I’ve told him that he doesn’t need to take her “gifts” all the time. And this past weekend, he HAD to give a picture he’d drawn of LEGOs to the guy who worked at the LEGO store.

Seeing how thankful others were for a simple drink of clean water definitely touched that giving heart of his. That night when we prayed, he asked God to “give all the people of the world good water.”

But he’s taken it even farther. The day we watched the video, he told me, “I will try to save money so I can give it to them, so everyone can come to Ohio and have clean water.” He even talked about saving money so that he could travel to them and take them money and water.

Then last fall when he heard that both of his grandpas would be going on mission trips (One to Belize, and one to Grenada), he raided his piggy banks. He told me that he wanted to send his money to help the people get water. Even when I explained that clean water might not be an issue for those countries, or at least in the areas where his grandpas were going, he still wanted to send money to help in some way. So, we divided his change into a couple of sandwich bags and marked them with his grandpas’ names. 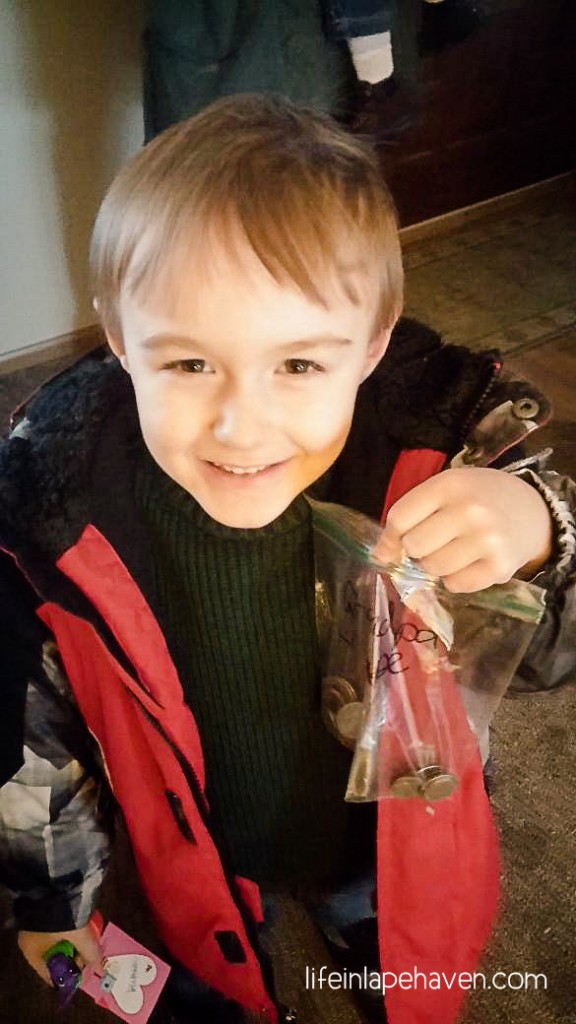 I was so proud of my little boy and his big heart. But I don’t think anyone was more proud or excited than Elijah when he was able to give his money to his grandpas, knowing it would go to those in need.

His exuberance in giving was convicting. He was the epitome of the cheerful giver of 2 Corinthians 9: 6 & 7, and a sweet echo of the widow who gave her two mites (Mark 12 & Luke 21).

I love that when he saw a need, he responded, not just with prayer but with action, too. He knew, trusting with a child’s faith, that praying meant God would help, but he also decided that HE would help however he could. I am praying that this is a lifelong pattern for him.

Of course, being a child, he still has his moments of “give me” and “I want.” (Then again, so do we as adults.) However, to this day, he continues to pray every so often about the “people who don’t have water.” This lets me know that seeds of the Great Commission are firmly rooted in his heart. He has the beginnings of an awareness of what true need is, and he has grabbed on to the joy of giving to help reach those needs.

Recognizing another’s need and caring enough and being willing to give and sacrifice to do something about it – that’s God’s heart. And it’s encouraging and inspiring to see it being mirrored in my child’s.