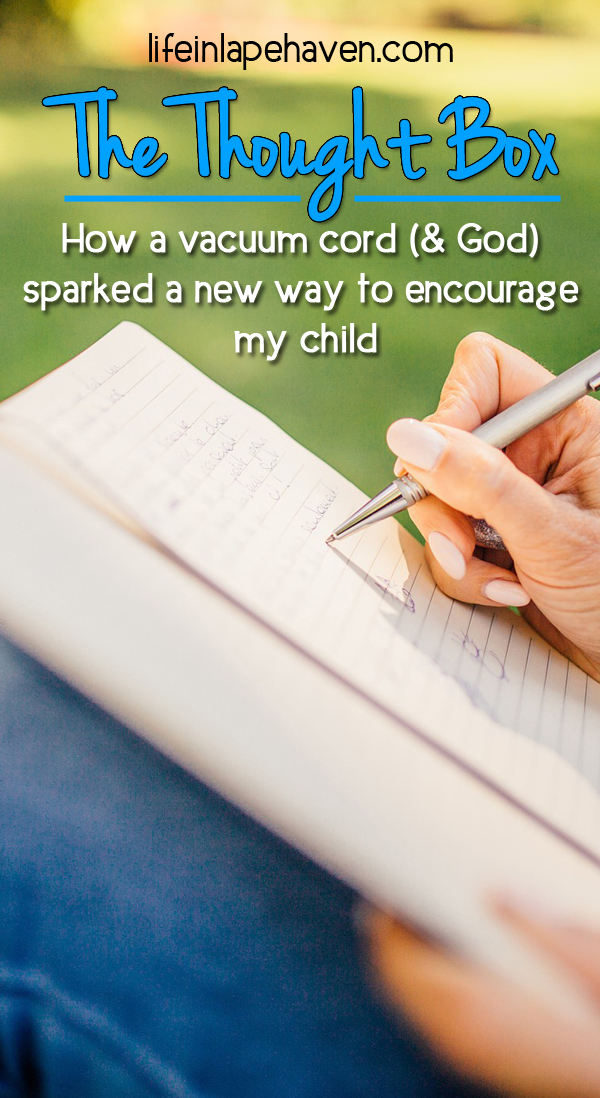 Last week as I was getting ready to vacuum the house, I began to unwind the vacuum cord and then stopped. The day before Elijah had had to sweep up a mess he’d made, and I had shown him how to wrap the cord onto the back when he was finished.

As I looked at the precise job he’d done of wrapping the cord, I made a mental note to tell him later that

I had noticed his effort. With his curious, active personality and stubborn, independent nature, there are some days when he gets “noticed” more for less-than-positive reasons (bossing his little brother around, getting into things he’s not allowed to, talking back), and I wanted to make sure I pointed out this “something good.”

The more I thought about it, the more I wished I could just send him a little note so he would know that I was thinking about him. Had it been my husband I wanted to acknowledge, I’d probably just shoot Brad a text message, but Elijah is only 5. He’s not going to have a phone for quite a while.

Then I had an idea.

I’d write a note and leave it for Elijah to read when he got home from school. However, rather than just hand it to him or tape it to the refrigerator, I’d make it fun and special.

Grabbing an empty cracker box, I cut down the sides, tucked three of them down in, and left the fourth as a flap that covered the opening. 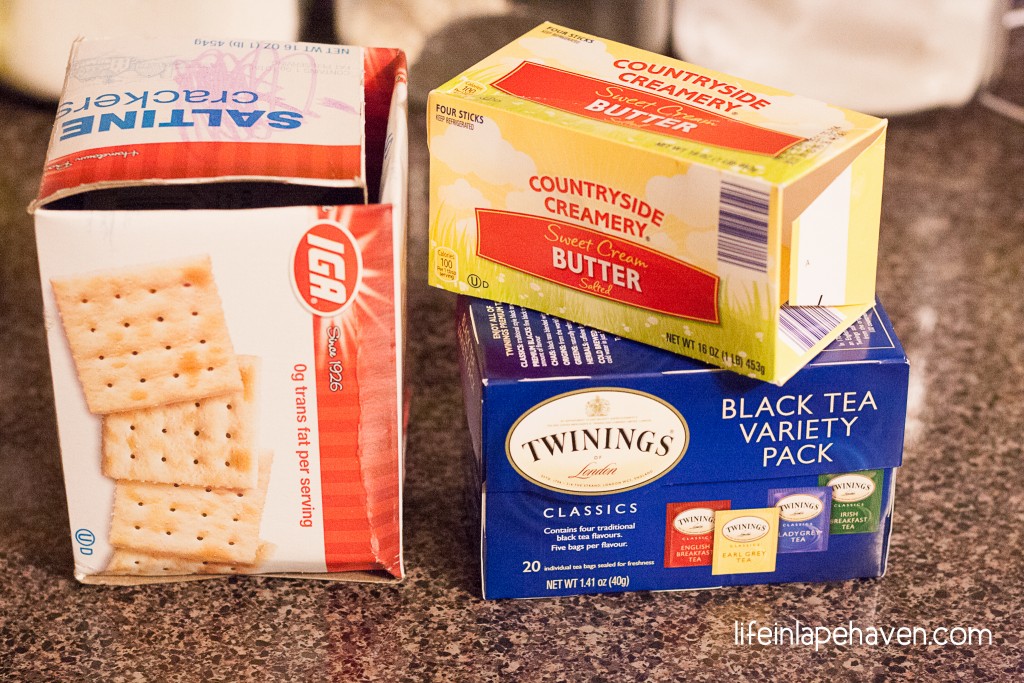 Ta-dah: a miniature “mailbox.” (All my Pinterest browsing has kept my creativity very active.)

I wrote out an easy-to-read note for my little man and slid it into the box.

This would be a special place where I could put notes of encouragement and praise throughout the day to let him know that I had thought about him often while he was away.

I dubbed it his “Thought Box.” 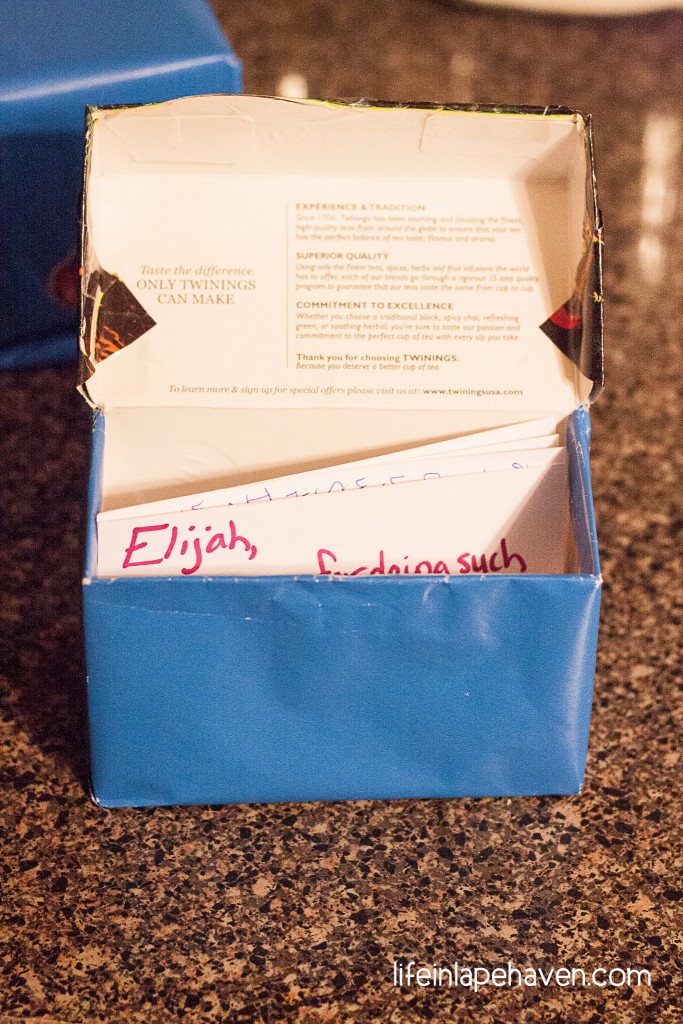 While I was in the note-writing mood, I went ahead and made one for Brad because, you know, husbands like be appreciated, too.

Once I had Elijah back home from school, I showed him the cracker box. I had every intention of digging out some wrapping paper and making it all fancy, but as it happened, the day flew by before I could.

However, Elijah didn’t mind at all. He was thrilled to have a special note just for him, delighted that Mommy had seen his careful work, and overjoyed at the prospect of getting more messages from Mommy and Daddy in his Thought Box.

He immediately wrote a letter for his Daddy’s box, too.

The next day, Brad was off work, so he picked Elijah up from school, and as Elijah came running into the house, the first thing my little boy said was, “I want to see what’s in my Thought Box!”

And I winced. I HAD thought about writing his note, but then got distracted by a phone call, and HADN’T WRITTEN ONE.

Elijah’s face went from radiant to rejected in a heartbeat, and I felt like the WORST MOM EVER!

I apologized and explained that I had started to write his message but didn’t get to it right away and forgot later that I hadn’t done it.

Thankfully, he’s a sweet, understanding boy, and he was fine with Mommy writing it out right then. (Whew!)

But seeing how important it was to him made me determined not to let him find an empty box again.

It also confirmed in my heart what I felt when the idea first sparked in my mind.

This was more than just a good “Mommish” idea. This was God once again directing me to a unique way to love my child. Just like the book I wrote for Elijah, this “Thought Box” idea would minister to his little heart and help us to encourage and affirm who he is growing up to be.

This weekend we finally decorated the boxes, and Elijah changed his from a cracker box to one that used to hold teabags and has a lid. It now holds all the notes from last week. 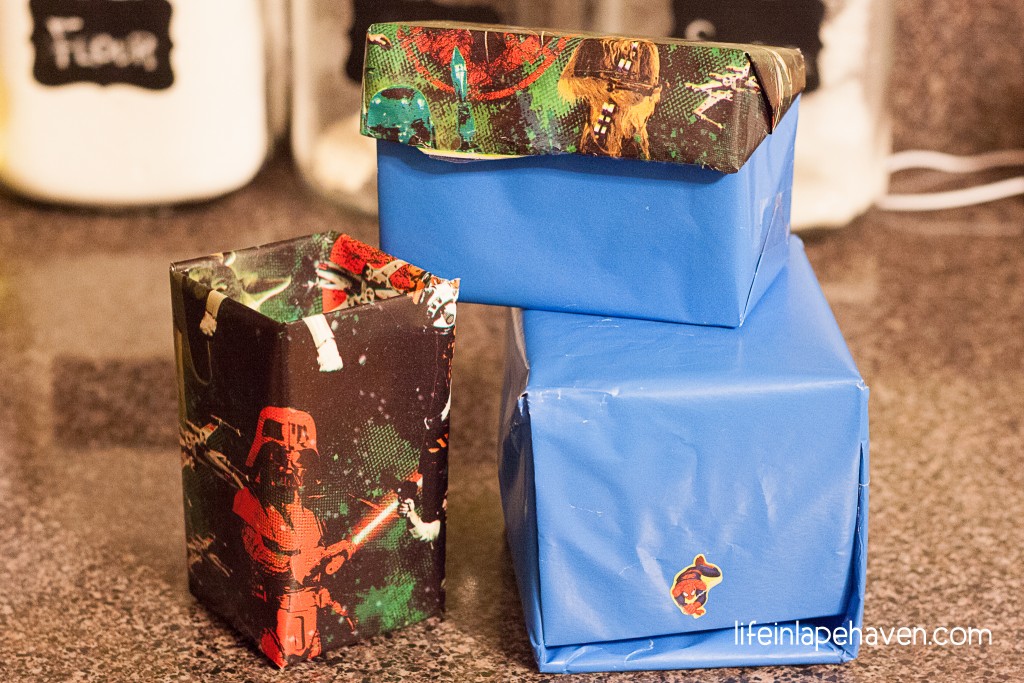 Clearly, I live in a house full of boys: Star Wars, blue, and Spiderman.

We made one for all my guys, although Elijah didn’t see the point in Josiah getting notes when he can’t read yet. (The plan is to draw pictures or read them to him.)

As if encouraging my family wasn’t enough, this idea has another facet that illustrates just how efficient God is when He does even the smallest things.

Following the example of Philippians 1:3, “I thank God for you whenever I think of you,” I have purposed to pray for my guys and thank God for them every time I write a thought about them for their boxes. 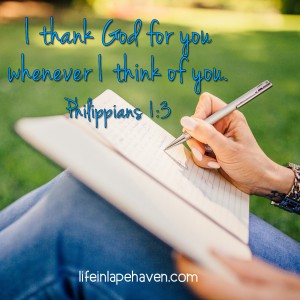 Clearly, He had all of us in mind from the start of this. It’s a nice reminder that we are always in His thoughts, too.