Trying & Tying: Teaching Our Kids to Do Hard Things 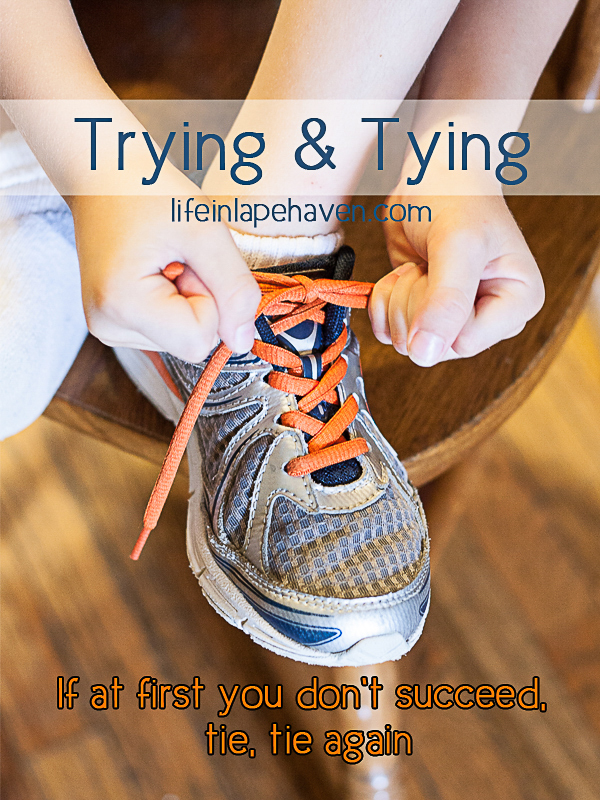 If at first you don’t succeed, tie, tie again….

With Elijah starting kindergarten this fall, we’ve been working to prepare him for this important milestone. (Mommy might not be as ready, but that’s another story). We’ve talked about what to expect during his school day, how he should behave, what skills he should have, and we know he’s ready academically, thanks to his own intelligence and his lessons on ABCMouse.com.

However, one of his biggest struggles has been learning to tie his shoes. It seemed simple enough when we started teaching him a few months ago. He had the incentive of needing to know before he went to school, and we knew he had the capability both mentally and physically. So, why is it that just last week he finally got it?

The reason was annoyingly simple (Extra annoying because I KNEW what the problem was): He didn’t want to TRY. 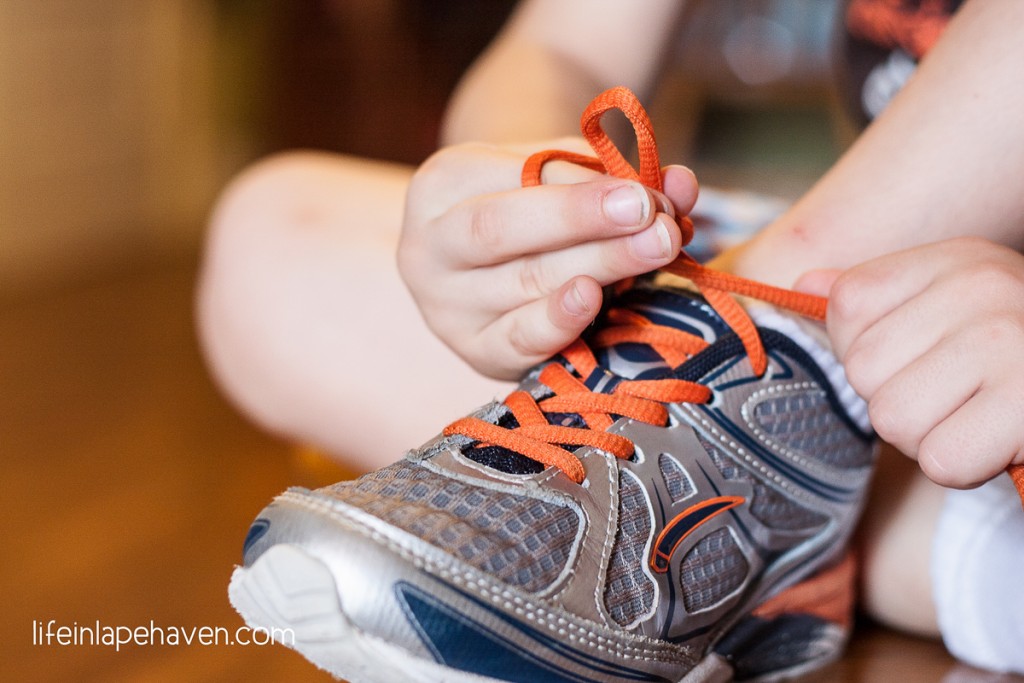 That was it. He stubbornly refused to attempt to tie his shoes, at least without a big to-do about how hard it was. Every time he had to put shoes on, his first defense was to announce that he wanted to wear his flip-flops. When that got shot down because of the weather (rain and flip-flops don’t mix well) or the amount of walking we’d be doing (flip-flops aren’t great for hikes in the woods), he went to either “I don’t know how, so it’ll save time if YOU do it for me” (nice try) or straight to “I don’t want to.” (Our favorite) Fun.

It wasn’t as if Brad and I were being tyrants about it, punishing him for not getting it perfect or never helping him. Nope. I had shown him – slowly – many, many, many times, and he knew how to do the initial single tie part, where you cross the laces, flip one under the other, and pull it tight. He’d actually been doing that himself for several months whenever he put on his shoes. If he ever actually attempted to finish tying the laces, we gave him help when he got stuck.

But ask him to keep trying or practicing, and a battle ensued. Every time.

Then finally last week, the heavens opened, and angels sang “The Hallelujah Chorus.” At the end of that day’s battling, Elijah managed to finish tying his shoe without any help whatsoever. He went from a grumpy, obstinate boy to a glowing, proud, capable boy in an instant.

He smiled at me and said, “Now I don’t have to be whiney or complain anymore!”

My response was, “Wow. Good job. I’m proud of you. But you know, you didn’t HAVE to be whiney or complain, even before you could tie your shoes. You CHOSE to.” He gave me a sheepish smile and nodded, “Yeah, I know.”

It would be easy (VERY easy) to be frustrated at that kind of reply if I didn’t realize how incredibly human it was. 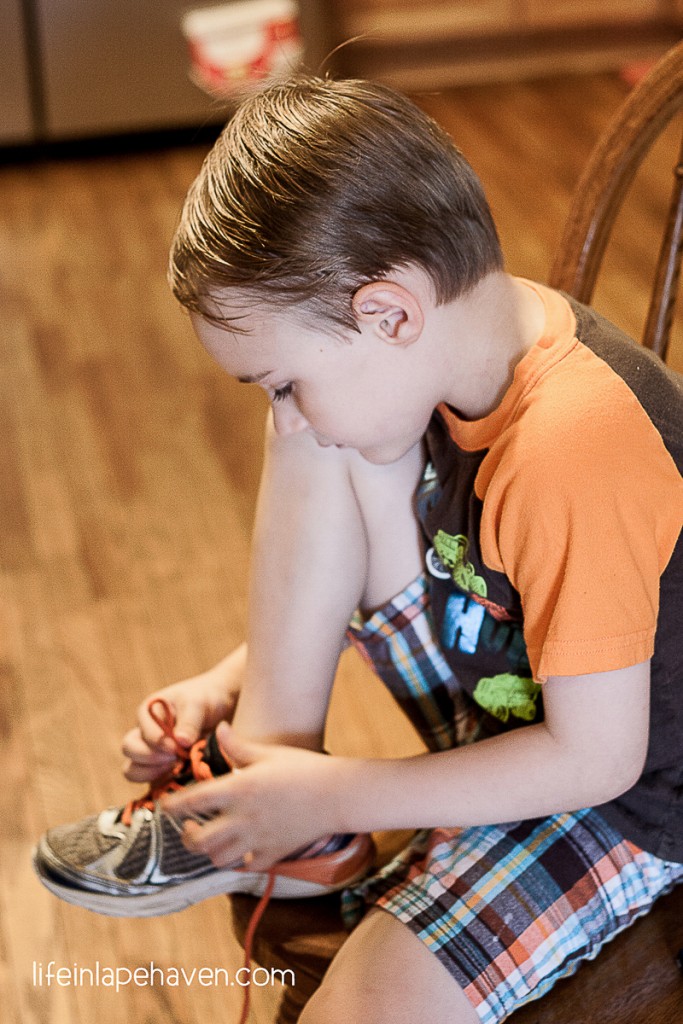 We’ve all acted that way at some point and probably more often than we’d care to admit. If we have a task where we are faced with the possibility of failure or not knowing exactly what we’re doing or having to exert more effort to accomplish it, we’re tempted to not even bother. We’ll use lots of excuses and be disagreeable or whiney in the process. Of course, once we conquer that something difficult, everything’s sunshine and happiness.

The thing I kept stressing to Elijah was that he’ll face lots of hard things in life and avoiding them doesn’t make them disappear. I’ve always told my boys, “I don’t want you to tell me, ‘I can’t.’ I want you to say, ‘I tried.’” You may not accomplish your goal on the first attempt – in fact, you probably won’t. But until you actually try, you never, ever will.

I want him to realize that the quickest way to get past something hard is to try, then try again, and then keep trying. We all know “if at first you don’t succeed, try, try again,” and “practice makes perfect.” We know that, but the DOING of it is where we struggle.


And as Christians, I think we should really be killing it on “doing hard things.” Why? Because we have the very Spirit of God living inside us, the Spirit who raised Christ from the dead! Talk about a hard thing…oh, wait. “With God, all things are possible.” (Matthew 19:26)

Remember, Philippians 4:13, says, “I can do all things through Christ who gives me strength.” (I repeated this verse over and over during both un-medicated deliveries of my boys because labor is hard…yes, worth it – but HARD.)

In addition, since we know that God is helping us to do whatever it is that we are facing, we don’t have to be whiney or complaining about it. We really don’t. For one, that gives no glory to God, and let’s be honest, it doesn’t make us look good, either.

“Death and life are in the power of the tongue…” (Proverbs 18:21) Saying over and over again, “I can’t,” “This is too hard,” “I’ll never get it,” will not help you accomplish a hard task. It will only make facing that task more miserable. 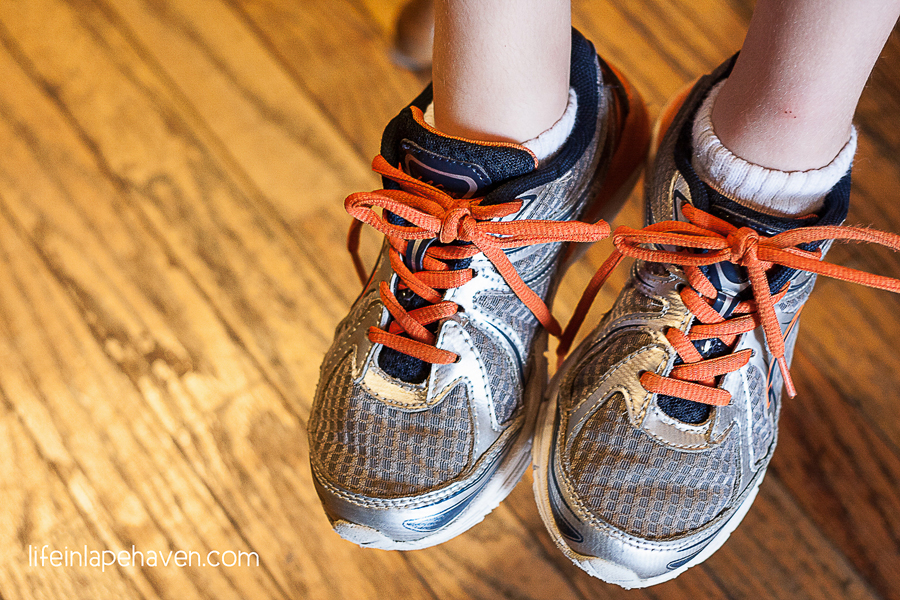 So we each have a choice: Face hard things bravely and with the determination to do our best and rely on God to help us succeed (or at least to have made a tremendous effort); or sit back, complain, and never come close to succeeding.

This might seem like a lot to expect a 5-year-old to understand and get from learning to tie his shoes, but I know he can, just like we can – if we trust God and TRY.

Embracing the Moments of “Mommy Sadness”

Why Our Child Goes to Public School