Tried It Tuesday: Our Experience with ABCMouse.com 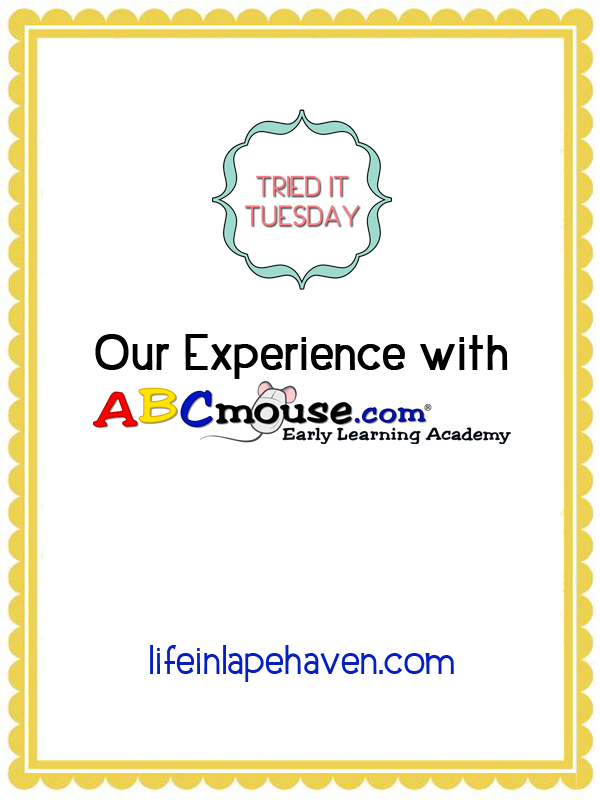 When I was pregnant with my second child, part of my “nesting” involved preparing Elijah to no longer be the only child and planning for ways to make that transition easier for him and for us. Knowing that I would be occupied with his little brother quite a bit in the first few months (nursing, changing, rocking, repeat), I was on the lookout for an activity that he could do somewhat independently, that would keep him quiet(ish), and that would be educational, if possible.

I had seen numerous commercials for ABCMouse.com on the preschool channel we watched, and one day I decided to see how much it was and if might be a good idea for Elijah.

When I pulled it up on my computer, I was almost overwhelmed by all that the program offered, but in a good way. I started to sign up, but then decide that maybe I should talk to my hubby first about committing us to a subscription of about $8 a month (billed yearly), even though it did include having two children on one subscription. However, since I’d already entered my email, after I closed out the sign up, I got either a pop-up or an email that gave offered me a “special” rate to join, which brought the price down to about $5 a month. I knew we could do that, so I signed Elijah up, and the two of us began exploring the site. (Since this was a couple of years ago, I’m not sure they still do that, but it’s worth a try!)

From the get-go, he loved it, and I loved it. The program, which is for ages 2-6, starts off with very basic “Toddler Time,” where children learn shapes, colors, letters, and numbers by completing lessons along a curriculum-driven learning “path.” Each lesson is made up of four to six activities (as they graduate up to higher levels, lessons can have more), including coloring pages, games, songs, puzzles, and stories. As the child learns, you can adjust the difficulty levels of the each activity, so even though they might repeat a puzzle as they progress from Toddler Time to Pre-K and Kindergarten lessons, they are still learning new things. 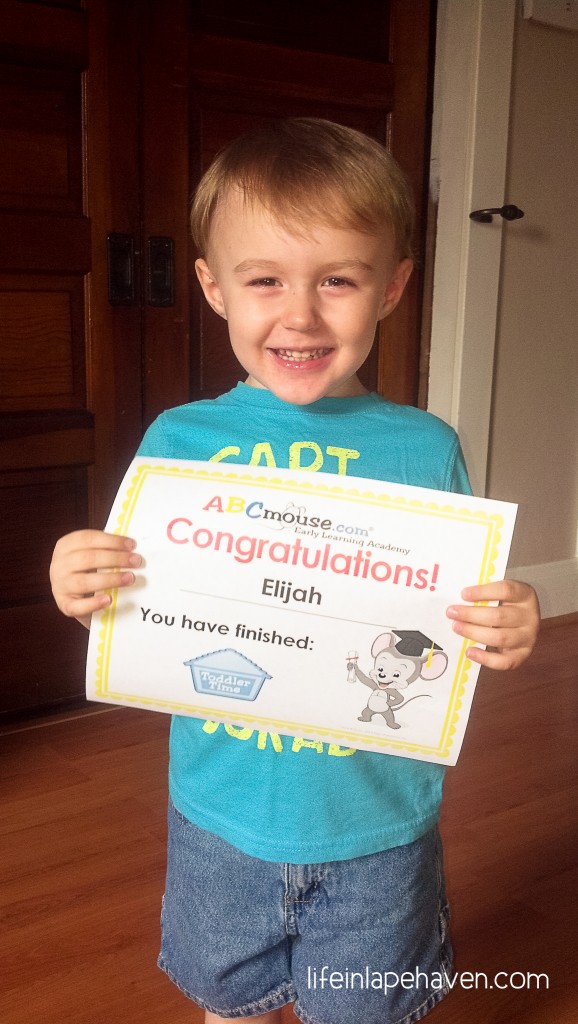 There are plenty of incentives for your child to keep moving along and completing lessons. For each activity completed, they earn virtual tickets to spend in the “stores,” where they can buy outfits for their avatar, items to decorate their “rooms,” or they can even buy and care for numerous virtual pets. At the end of each lesson, they win a “prize,” and at the completion of an entire section – they graduate with a printable certificate and a bigger prize. In our house, we celebrate a graduation with a special treat, too.

Not only can the child follow the specified curriculum in their “classroom,” they can also explore a zoo and a farm, where they learn all about different animals; complete individual basic activities to really focus on a certain area; and watch tons of music videos at the theater. My boys LOVE the videos, which all teach something, including letters, colors, numbers, and seasons. Each child also has a fish tank and a hamster that they can visit and design the tank/cage for. (Elijah and Josiah love rearranging the hamster tubes).

Each time they move through a set of lessons, they are also able to learn about different environments in the world, including the animals and plants that live there, so they are getting some basic science added to their reading, math, art, and music. 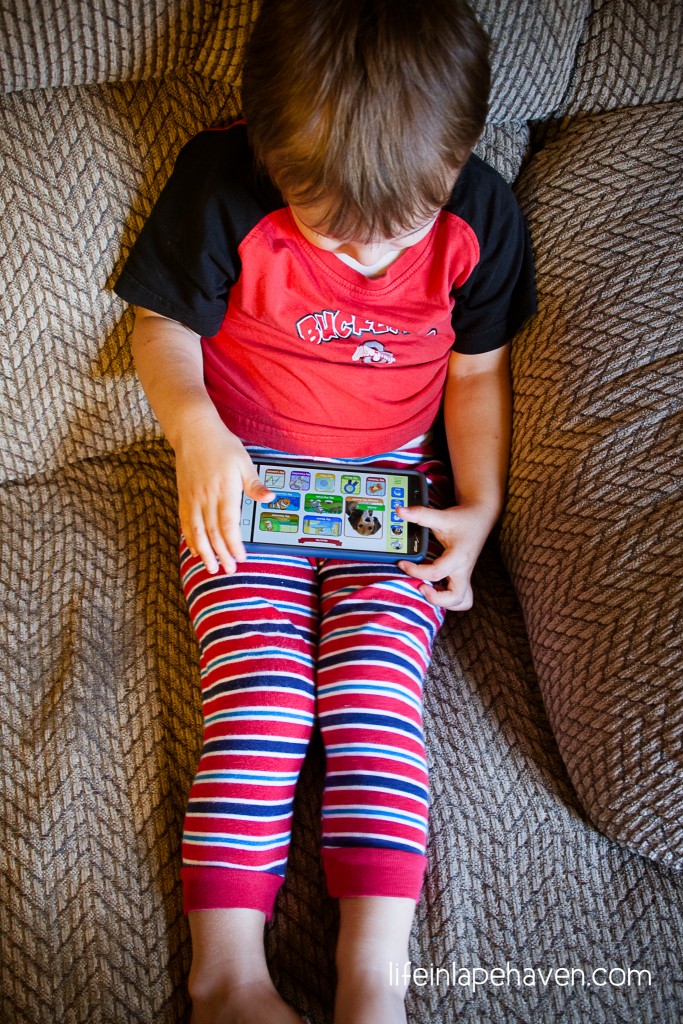 When your child first starts, you definitely need to help them in some ways, but the program is designed so that they will easily be able to move through it independently eventually. One of the first lessons when you set up an account is on how to use a computer mouse, and Elijah picked that up really quickly. Of course, you can also access the site through tablets and smart phones, so touch-screen is also an option. And we all know how quickly little guys can learn technology!

The only downside to them being able to move around so easily in the program is that they can leave a lesson without finishing it, click in to exploring the zoo instead of finishing a story in their lesson plan or deciding it’s time to play with the hamsters rather than color the letter P. They won’t move forward in their lesson without completing the activities, though. This mean that most of the time I need to be right beside them, Josiah especially, or at least nearby (doing dishes with him at the kitchen table), so I can monitor what they are working on. Plus that way I also can encourage them or talk them through something if they get stuck.

In our house, the rule is for Elijah to complete two sets of lessons before he can go “off-roading.” For Josiah, it’s at least one whole lesson. (Josiah started even younger than Elijah because he kept watching Elijah use it. Since you can have two children on one subscription, I just added him in when he was old enough, and he started at the beginning, just like Elijah had). We try to have them do ABCMouse (or “B-Mouse” as Josiah calls it) a few times a week at least, and most times, we don’t even have to remind them. They ASK to “play” ABCMouse, sometimes even fighting over who gets to. While I could do without the fighting, I’m thrilled that my boys are so excited to learn. 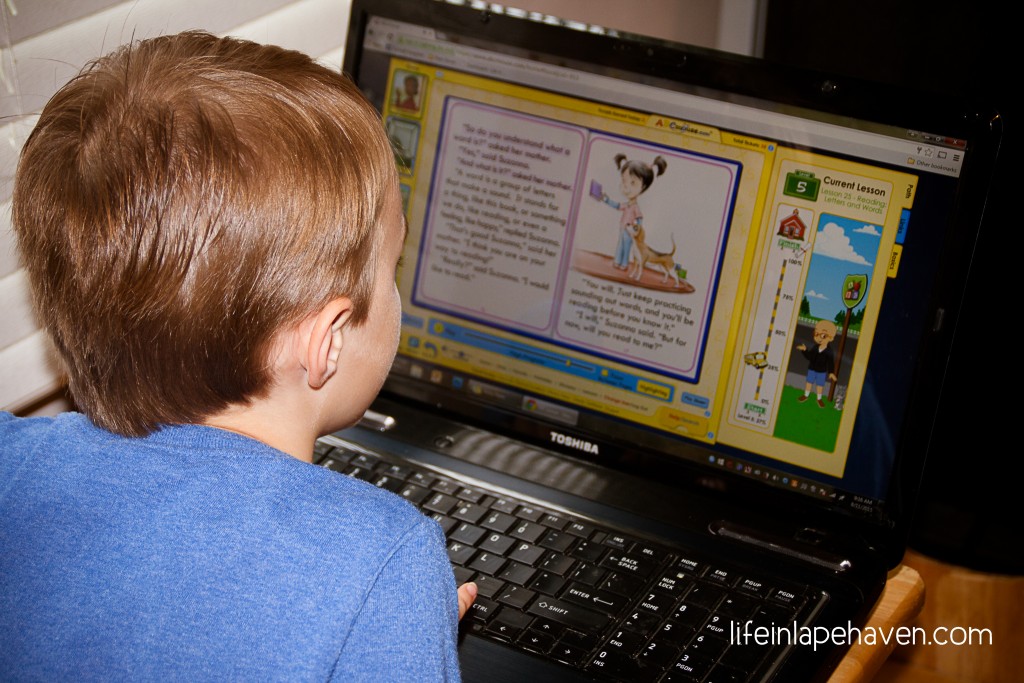 I’m also very certain that these lessons helped Elijah be more than ready for kindergarten. For example, he knew 22 of the 35 site words for his class the first time he saw the list! He just rattled them off, running right down the page. While I have worked with him a little outside of ABCMouse (not really on words, though), and we read together every day, I was surprised. I know that working in this program, or “playing” it, helped prepare him.

So after at least two years of “trying” ABCMouse.com with our boys, I can easily say that, for us, it is a keeper.

How about you? Any experience with this online program?