When God Says, “Start a Blog” 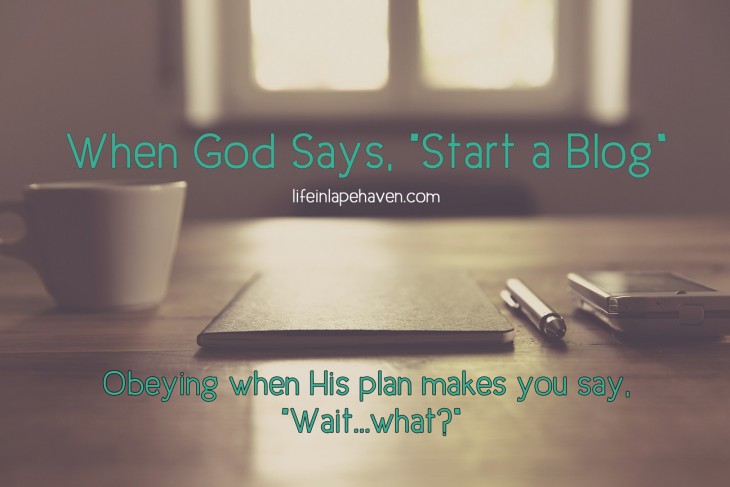 Obeying when His plan makes you say, “Wait…what?”

I was preparing to upload a picture to Facebook one day last fall, when I realized that I had more to say about the picture than I could really put in a simple caption. That was when God whispered, “Start a blog.”

I immediately thought, “Wait…what? Um, no. That’s not necessary. Besides, I don’t want to blog. I have no idea how all that works, nor do I have the time. And I wouldn’t have anything to write about. I’m a stay-at-home wife and mom. There are plenty of other people blogging about that same thing. So, yeah, that’s not for me.”

But God is persistent. And He knows me. That means He knows that He HAS to be persistent for me to finally get what He’s been telling me all along.

How do I know this? Because He’s done it before. It’s kind of our thing.

For example, when I was a young, single chick, I l lived in an area where there weren’t many available guys my age, which was frustrating for a girl who knew in her heart that God’s plan for her included a husband and a family.

God said (believe it or not), “Join eHarmony.” Seriously.

I immediately thought, “Wait…what? Um, no. That’s not necessary. Besides, I don’t want to. That’s for desperate people. Online dating? No, thank you. What about creepers and all that? Yeah, that’s not for me.”

The whisper never went away…for at least a year. Finally I mentioned it to my mom, and she said, “Oh, I think you should! It could be fun.” I think for her, it was like playing “The Dating Game” or something. She liked seeing who I got matched up with.

However, within a few months, I met my husband. Within a year and a half, we were married.

Do I think online dating is for everyone? No. I didn’t even think it was for me. But God knew.

Did I miss out on time with Brad because I hesitated in signing up? Nope. God’s timing is always perfect. Brad actually hadn’t been checking his account for a while, then one day switched a setting to include a larger area of Ohio, and I popped up.

No, God, again, knew what He was doing. He knew I take a while, sometimes, to accept that what I’m feeling is truly His will. So, He started nudging me right when He needed to.

Even though it wasn’t what I had planned for how I would meet my Prince Charming, God came along and perfectly orchestrated everything. There is no doubt in my mind that it was part of His plan. My husband is everything that I didn’t even know that I needed in a mate. But, as usual, God knew.

So, when I felt God’s leading to start a blog (of all things), I, of course, hesitated at first. However, as the idea settled into my heart, I started doing research. I started trying to come up with a name. I started planning what I could actually write about.

Since God had only given me the directions of “start a blog,” and little else, I was just stepping out slowly in faith that He would give me the answers I needed along the way.

Thankfully, I know I’m not the only person that God leads in this way.

Remember Abraham? God simply said, “Go,” and according to Hebrews 11:8, “He went out, not knowing where he was going.” (As in, without a map or destination.) Did he say, “Wait…what?” I don’t know. Genesis 12 just says that he went. Abraham simply started walking and followed God’s leading to the land God had for him and his descendants.

Remember Gideon? God called him to be a warrior and lead an army when he was hiding from the enemy and believed himself to be the least of the least. He was clearly hesitant and slow to accept God’s plan. Once he did, God whittled away his numbers until there were only a few hundred. Then God decided that the weapons of choice were trumpets, pitchers, and torches. However, despite how confusing that probably felt at points, Gideon still obeyed and was victorious. (Judges 6 & 7)

You could go through the Bible, cover to cover, and find numerous accounts of how God’s plan, ones that usually didn’t make a lot of sense initially, interrupted a person’s life for the better and for His glory.

So, I’m starting a blog. Not because I really wanted to (I’m enjoying it now, though), not because I feel I’m the world’s greatest writer (I do like writing and value grammar, but don’t expect perfection every time because I’m probably typing surrounded by the chaos of my boys playing), not because I know what I’m doing (I’m learning, but it’s still overwhelming at points), and not because I have any grand plans for my blog to change the world or make me famous (Despite my personality, being in the spotlight and vulnerable is not exactly comfortable).

I’m doing it out of obedience to His leading, plain and simple, and with the prayer that God will use it to encourage, challenge, or at least amuse those who actually find it and read it.

I have no idea what God has planned for this blog, but I know He has a definite purpose that maybe only He can see and understand right now.

Hopefully someday I’ll look back at it all, seeing what He’s done, and say, “Wait…what? You did all that?”

Photos courtesy of my father-in-law and pixabay.