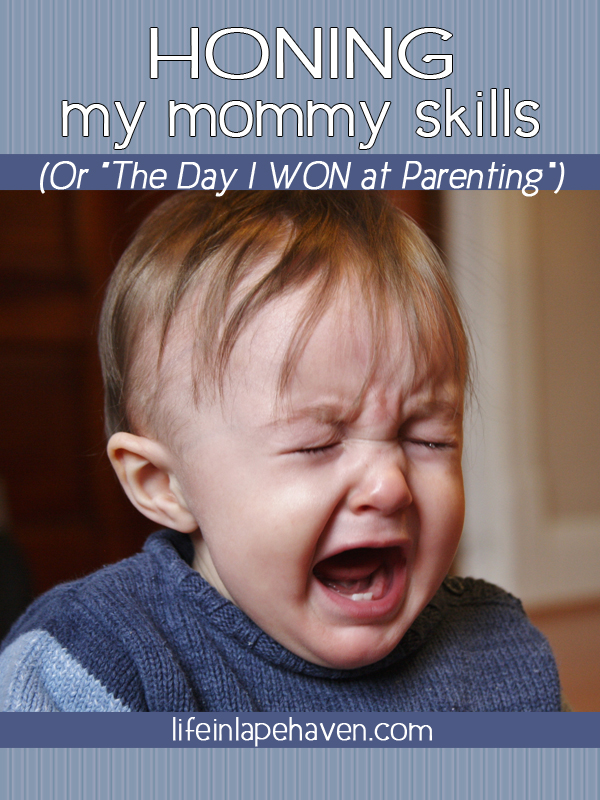 On Sunday, I earned a small feather in my “mothering” cap, a little mental badge of “Way to Go, Mommy!” There was a moment Sunday when I was not only surviving, but I was dominating this adventure of parenthood. It felt pretty great.

We were getting ready for church (and not running late, which is another WIN!). I was in the bathroom, finishing my hair and makeup. Brad was checking the diaper bag and helping our boys get their shoes on the right feet.

Suddenly, I heard Josiah half-crying, half-yelling, with a slight edge of panic in his voice.

And I KNEW. I knew with 100 percent certainty what was going on. I knew this cry. Somehow, I just knew exactly what it meant.

“Brad?” I yelled to the kitchen. “Brad, Josiah is stuck in something. What is he stuck in?”

Then I heard Brad, who hadn’t replied to or acknowledged me, ask Josiah, “How did you do that?”

Again, I yelled to the kitchen. “Is he stuck in something?”

Apparently Brad finally heard me over Josiah’s complaints. “Yes. He got his finger stuck.”

I smiled at myself in the mirror, feeling rather impressed with my mother “skills.” I had called it. I knew his “I’m stuck” cry-whimper. It was like leveling-up in my “mommyness”!

When you bring home your newborn baby, you feel like such a “parent” when you finally start to differentiate your baby’s cries for when he’s hungry, tired, or needs changed. You get to know his reactions to everything: you know which toys he loves, what food he’ll eat, what food he’ll throw over the side, and which people will make him cry just by talking to him.

However, lately, I’ve been fine-tuning my “mother’s sixth sense,” that instinct that makes our kids believe that we have eyes in the back of our head, that certain awareness for knowing exactly what your child is doing without having to be right beside him.

I’ve learned the sound of the refrigerator being opened. I know when they’re being TOO quiet (pretty much ANY TIME one or both boys are quiet and not sleeping). I can tell from something in their laughter that they are wrestling and one of them is sitting, standing, or lying on top of the other one (Do you know how often I say, “Get off of him!” in a single day?).

Now, I wish I could say it’s just because I’m awesome that I can tell Josiah’s “I’m stuck” cry-whimper from his “I’m just faking this” cry, but that’s not it.

And it’s not just because I have to, although it does help to prevent certain disasters when I can anticipate or at least catch them doing some things BEFORE they do it.

It’s actually really simple. It’s because I know Josiah. I know Elijah. After spending nearly every single day of their lives with them, including their time in utero, I know my children very, very well.

As I looked at myself in the mirror, feeling excited with my “momtasticness” (I don’t know if that’s a word, but I like it), God dropped a verse in my heart.

“The righteous cry out, and the Lord hears, and delivers them out of all their troubles.” (Psalm 34:17)

The Bible tells us that when we call out to God, He will answer us and help us, but I’d never really thought about the fact that, just like other parents, God knows what each of our cries mean. He can tell OUR “I’m stuck” cry-whimper from our “I’m just faking this” cry. (Hmmm…)

He hears, and He delivers us from our troubles.

God knows what we need because He knows us (also because He’s God). And while I’ve only been a mother for a little over 5 years, God has been a Father for quite a bit longer. He’s got this parenting thing perfected. He’s known us from before we were born, before we were even conceived, and He knows not only our past, but God has already written out His plans for our future. (Psalm 139:13-16, Jeremiah 29:11).

So while I felt pretty “parenting level: expert” on Sunday morning, as much as I love my boys, pay attention to their intricacies and quirks, and can anticipate to the second when a meltdown is going to hit, God reminded me that my skills are just a drop in the bucket compared to how capable, equipped, and on-it He is when it comes to caring for His children.