Elijah and the Bully 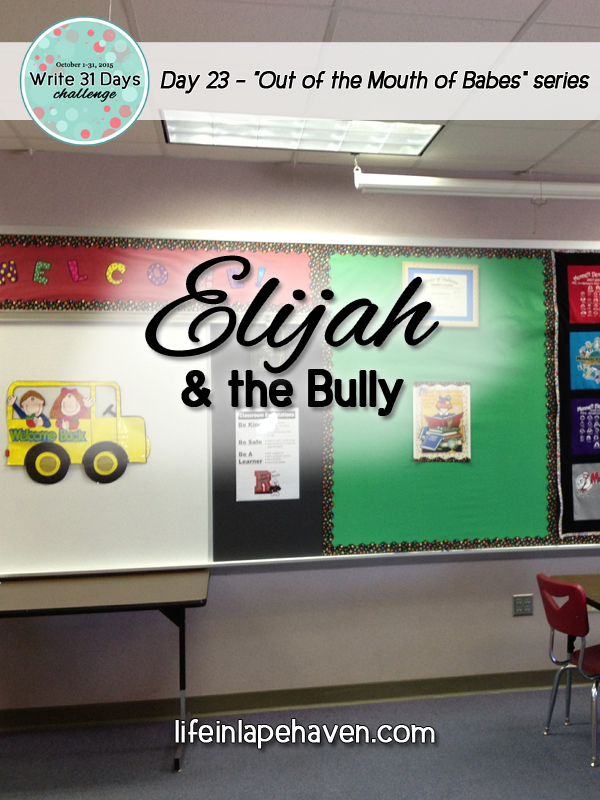 Sometime last month, Elijah got into the car after school and announced,

“I have to tell Daddy that he was wrong!”

Intrigued, I asked Elijah what he meant.

“He told me that bullies probably wouldn’t bother me, but he was wrong.”

That was not the reply I had expected from my kindergartener. I imagine he and Brad had talked about his class and bullies around the time Elijah was starting school (Perhaps Elijah had heard about bullies on TV and was worried?)

“Do you have a bully in your class,” I asked him.

So the bully was a girl. Hmmm.

Through a series of other questions, I learned about one little girl in his class who said mean (for a kindergartener) things to the other kids in the class.  Apparently she had also gotten into trouble in class a lot and had even used a few bad words.

When we got to how she had bothered Elijah, he told me, “She came up behind me at recess and said, ‘I don’t like you.’”

At that point, I could have told Elijah how unkind that was or how mean she was, but I didn’t. I didn’t need to give Elijah more reason to feel hurt. Instead I felt it was important for Elijah to look at the situation a little differently.

I think I shocked him a little when I told him, “Well, she doesn’t have to like you. But do you play with her a lot? Does she know you?”

Since I was driving, I couldn’t see his reaction to this thought, but I could hear the smile in his voice when he said, “Yeah!”

Then I talked to him about how oftentimes, people who are unkind to others act that way because they aren’t happy themselves.

When he seemed a little confused, I gave him an example.

“When you are upset or in a bad mood, are you always nice to Josiah? Or do you treat him not very kindly if you’re grumpy?”

So he seemed to understand. We talked about how he could be kind to this girl, even if she was being mean, and how he could help his friends if she was mean to them. The last thing we did was pray for her, that she would learn to “be good” (his words) and that Elijah would be able to be nice to her.

When Elijah is older, I don’t know how much he’ll remember about the specifics of this school year. I personally remember several moments from my kindergarten experience while my hubby doesn’t remember any of his. If I tell him about a little girl who said that she didn’t like him, he’ll probably laugh it off, similarly to how my oldest nephew and I laugh at how, when he was three, he thought that calling me a “hunting deer” was a big insult.

However, whether Elijah remembers the incident or not, I’m hopeful that the habit of praying for those who are unkind to you and trying to understand and have compassion for them is something that sticks with him, something that becomes the automatic and the normal.

Jesus tells us to love our enemies (Matthew 5:44), and to bless those who curse us, pray for those who mistreat us. (Luke 6:28)

Because through our obedience, our humility, and our efforts to love and forgive, God can change things, if only our heart for that other person. 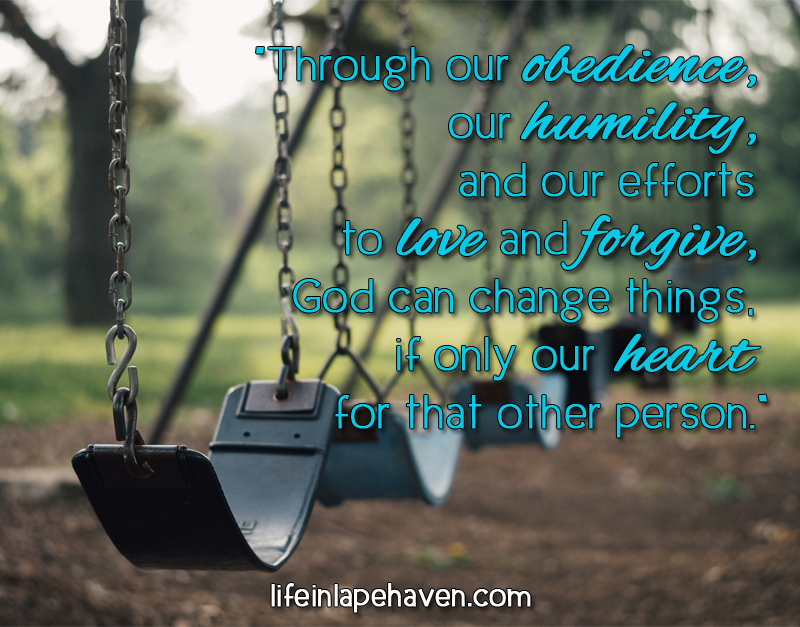 Sometimes, though, he also changes the other person.

About a week or two after the initial incident with “the bully,” Elijah got into the car happily and ready to share about his day.

The first thing he told me was that this girl had done really well in class that day, “clipping up to purple,” which means she behaved so well that she was at the top of their classroom’s behavior monitoring chart and had earned a prize for the day.

Elijah said, “I told her that I was proud of her.”

Yes, my mommy heart melted. He was encouraging her to be good and letting her know that he had noticed.

I asked him how she responded to that, and he grinned at me.

“She smiled a little bit.”

I know that this little girl still has times of being mean or misbehaving in class because Elijah keeps me filled in on her progress, but he’s still watching out for her. We pray for her every so often, and his heart is kind toward her. He’s cheering her on, wanting good for her.

Whether or not this girl ever likes Elijah, she’ll definitely know that he cares about her.

This is part of my Write 31 Days series, “Out of the Mouth of Babes: 31 Quotes from My Children.” I’m posting every day in October, so if you’ve missed one and need to catch up, or if you really enjoyed a particular quote, you can find the entire series on my Write 31 Days page.

Another fun part of the Write 31 Days is that you can enter to win a $500 Shopping Spree from DaySpring.com!

DaySpring is celebrating all the amazing Write 31 Days READERS who are supporting the nearly 2,000 writers this month! Enter to win a $500 shopping spree by clicking this link and following the giveaway widget instructions. There will be a link at the end of each day’s post from October 15 through October 30.

I would love it if one of MY readers won!!!  So, good luck and THANK YOU, THANK YOU for reading! 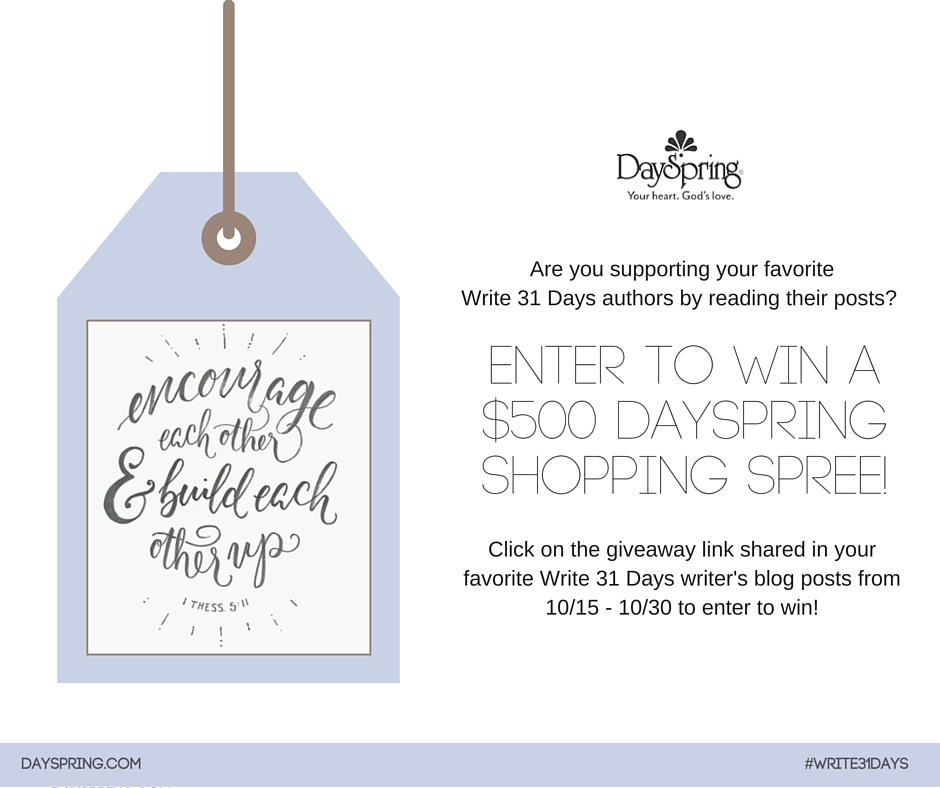