My Boys and the T-Shirts 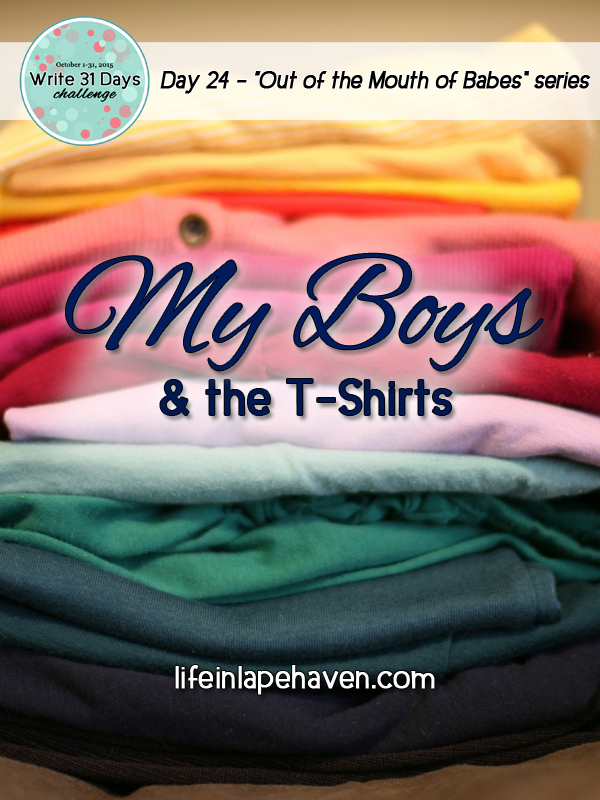 I love Pinterest.  I really do. It is my homemaking Google. It is the best way to bookmark your finds and favorite pages from around the internet (recipes, articles, how-tos, inspirational quotes, anything) and the best way to find new things to bookmark.

I think my sister-in-law introduced me to this wonderful online world over 3 years ago, and suddenly I was making all kinds of things from scratch, such as bread, chocolate syrup, ice cream, taco seasoning, and 300 crockpot meals (Ok, I haven’t made THAT many, but I probably have almost that many pinned.)

Plus I had tons of great activities to do with my boys, including making our own play dough, sidewalk paint, and every kind of craft you can make with a child’s handprint on paper. (You KNOW it’s true!)

And, of course, Christmas and birthday parties would never be the same again.

Ok, actually, I never strive for a “Pinterest-perfect” anything – meal, event, home, or holiday. I don’t have time, money, or patience for that. I’m a bit more practical. But I do truly love the inspiration and creativity that I have found there. I have a little extra daring to try new things or figure out how to make something myself. It has helped me to look twice at common things and think, “What else can I do with this?”

So it was totally normal for me to get struck with inspiration one day while I was sorting out old clothes in my room and relegating worn t-shirts to the rag pile. I was about to be an “Awesome Mom.”

Snatching up my phone, I searched my Pinterest boards for the idea that I knew I had pinned, probably months ago.

There it was! Grabbing a couple of my old shirts, I headed downstairs.

“Hey, boys,” I called as I passed Elijah’s room where the two of them had been playing nicely for a change. “How would you like some super hero capes?” 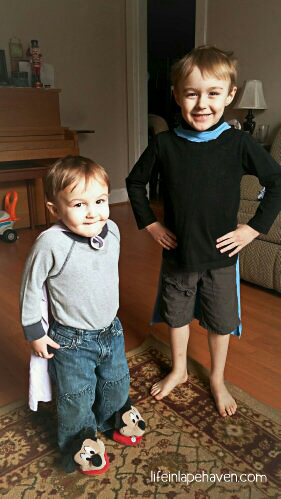 They came thundering down the stairs behind me, curious and excited about whatever it was that Mommy was preparing to do.

Smoothing the t-shirts out on the table, I snipped off the sleeves and cut down both sides of the shirt. A quick trip with the scissors around the bottom of the neckband at the front of the shirt gave us one completed cape.

My boys were ecstatic!

Repeating the same steps on the other t-shirt, I held up two super hero capes to my eager little boys.

Josiah started calling out, “SuperMAAAAN! SuperMAAAAN!” before I even had the cape slipped over his head.

In probably less than 10 or 15 minutes from the time I had the idea, there were two super hero boys running in circles around the living room, with Josiah shouting, “Supermaaan, flying in the scare!” (He means “air.”) 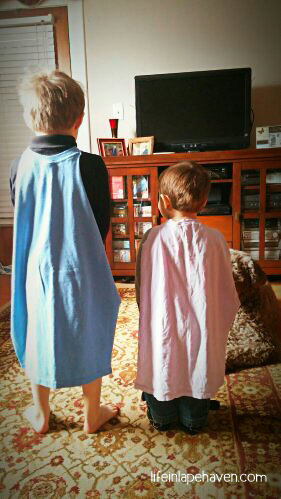 I totally wish I had taken pictures of the project as we did it, but we were all a little too in to seeing if it would work. Since I didn’t, here are a couple of the many options on Pinterest for making some t-shirt capes for your own little super heroes.

Homemade Super Hero Cape – This one is similar to what I did.

DIY Super Hero Cape – This one opens the neckband to eliminate the choking hazard.