My Favorite Christmas Movies & A GIVEAWAY! 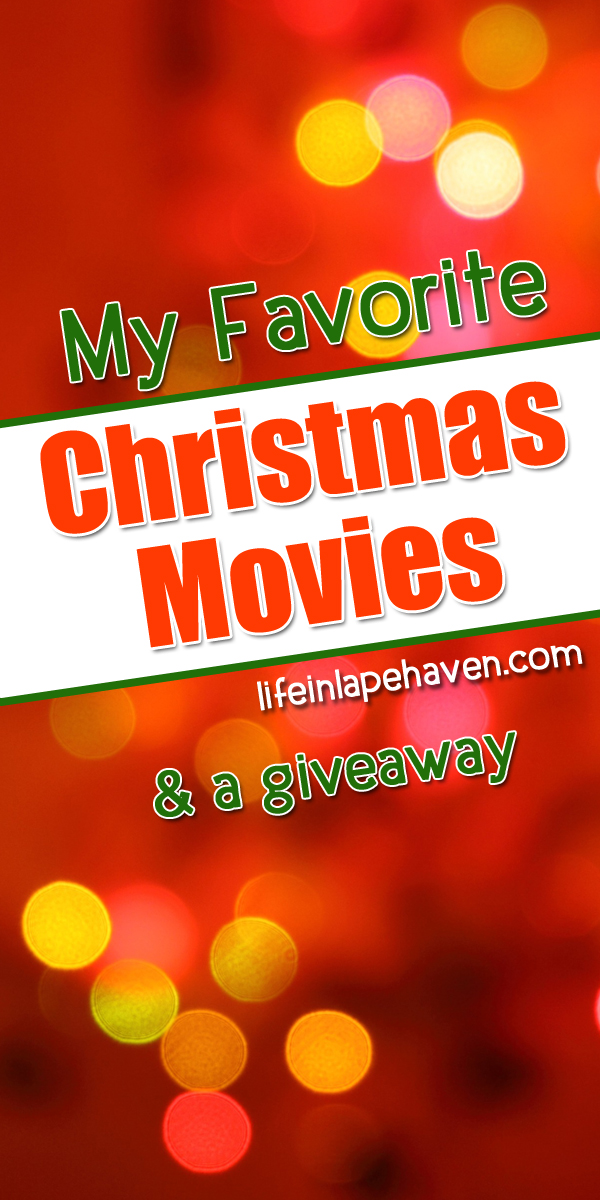 With Christmas less than two weeks away, it’s time to really embrace the season by watching all my favorite Christmas movies and television specials and singing along to Christmas carols and fun holiday songs all day.

Sure I’ve already caught a couple of films and shows, and we have had Christmas music playing off and on since the day after Thanksgiving, but I think that everyone generally has a few very special movies and songs that they just have to enjoy every year. This week, I’m going to be sharing my lists with you, and as part of the fun, I’m also going to be doing a GIVEAWAY! (More on that in a bit)

There is nothing like a few good Christmas movies to get you ready to celebrate the holiday. Cuddled on the couch with your family, sipping hot chocolate, and munching on Christmas cookies while you all laugh, sing, or even tear up thanks to a film you’ve probably seen so many times you can quote it by heart. It doesn’t matter. Favorite Christmas movies never get old or lose their charm.

For me, I have a huge list of holiday features that I appreciate, but there are 9 movies that I have to make time for each Christmas, in order from “Really Want to See It” to “Absolutely MUST SEE It.” (I’ve included an affiliate link to each movie, which means at no additional cost to you, I may receive a small commission when you use the link.)

1944, MGM Musical/Romantic Comedy. Judy Garland, turn-of-the-century costumes, a delightful cast, entertaining storyline, and catchy music make this such a fun film any time of the year because the movie doesn’t just take place at Christmas. The story follows the lives of the Smith family over the course of the year leading up to the 1904 World’s Fair in St. Louis. However, a lot of the best stuff in the show happens during the climatic Christmas Eve scenes, including Judy singing the iconic “Have Yourself a Merry Little Christmas” to her on-screen little sister, Margaret O’Brien.

My favorite part: Either the after-the-party scene where Judy Garland has the “boy next door” help her turn out the lights in the house, or the Christmas Eve ball, including the conversation between the two older girls as they get ready for the evening. Oh, and the early-dinner-scheming in the beginning of the film.

1996, Romantic Comedy. Denzel Washington & Whitney Houston star in this remake of the classic Carey Grant Christmas movie, The Bishop’s Wife. While I like both versions of the movie, the music in The Preacher’s Wife makes the newer film my pick. (Sorry, Carey.)  Denzel is an angel named Dudley, who is sent to help a busy, giving preacher, a preacher who is so focused on his work for God that he tends to overlook his family. However, Dudley’s arrival seems to cause even more trouble for the minister.

My favorite part: The children’s Christmas program is adorable, and when Dudley “fixes” the preacher’s little boy’s firetruck.

2000, Comedy. The live-action adaptation of Dr. Seuss’ book and the 1966 cartoon is always fun. While other adaptations of Seuss classics have gone horribly awry (ugh…The Cat in the Hat!), this one is pretty perfect. I love how fully they embraced all things Seussical and Who, and Jim Carey plays a good, mean Grinch. Watching this with my boys makes it even better.

My favorite part: Spoiler alert – When his heart changes, of course, and he returns Christmas! Also, when he tries to sing along with the Whos as they celebrate around their Whoville Christmas tree. “Fah Who Foraze, Dah Who Doraze” is just fun to say.  ­

#6. While You Were Sleeping

1995, Romantic Comedy. If you’ve never seen this one, you have to. Sandra Bullock plays Lucy, a lonely girl who is smitten with a handsome stranger who passes her tollbooth every day. When she jumps on the tracks to save him after he’s mugged and fallen in to a coma, his family mistakes her for his fiancée. Only one person doesn’t believe the story, his charming brother (Bill Pullman), who is determined to find out just who Lucy is.

My favorite part: Oh, there are sooo many great scenes and endlessly fun quotables. This is a movie that my mom and I try to see together every year, and it’s always just as funny.  One of our favorite scenes is the one around the dinner table with all of his family talking about the mashed potatoes and John Wayne. Watch the movie, and you’ll understand.

2004, Comedy. Do I seriously need to write a description for this one? Will Ferrell is Buddy, a human who grew up as an elf. Once he realizes this, he goes to New York to meet his father, who has managed to wind up on Santa’s naughty list. Hilarious, heart-warming, and joyful. One of the best family Christmas movies!

My favorite part: The quotes. All the funny quotes. Oh, the initial meeting between Buddy and his dad with the impromptu “Christmas-gram”and when Buddy decorates the toy department. Or discovers the mailroom. And when he takes Jovie (Zooey Deschanel) on a date. “Francisco….

2004, Biblical Drama. This is a beautiful depiction of the story of Mary, Joseph, and the birth of Jesus. While I’m still a bit amused at how easily Mary actually delivers her baby (seriously, I’m pretty sure Mary had to work a little bit for it) and annoyed by the fact that the wise men show up so early (they would have been a year or more later in arriving), I love this movie. It shows the real emotions, humor, and struggles that Mary, Joseph, their families, and friends may have dealt with. It’s so easy for us to forget that these people actually lived – they aren’t just characters in a story. Seeing their humanity brings the Christmas story that much closer to home, stirring my heart to the awesomeness of Jesus as Immanuel, God with Us.

My favorite part: I love Joseph. Seriously, he’s my favorite character. Mary and Joseph’s journey from Nazareth to Bethlehem and their journey to caring for each other. Also, the comedic side of the wise men is pretty great.

1954, Musical Romantic Comedy. You had to guess that this one made my list. It’s one of the all-time greatest Christmas movies. Bing Crosby, Danny Kaye, tons of singing and dancing, and Christmas! The story is about two army buddies who come to the aid of their former commanding officer by putting on a Christmas show at his Vermont lodge. With the aid (and adoration) of a sister act, all they need is a little snow to make it perfect.

My favorite part: Can I first share my least favorite? Vera-Ellen. She drives me crazy throughout the whole movie because she’s constantly looking at the camera, especially during dance routines, and it’s just weird. I mentioned this once to a friend, and she said now that she’d noticed it, it was bothersome. So, sorry if this changes the movie for you.

Okay, the good parts – the banter between Bing and Danny and the songs and dances. Obviously.

#2. The Shop Around the Corner

1940, Romantic Comedy. Hello, Jimmy Stewart! He is one of my classic Hollywood favorites (I mean, he’s just great, isn’t he?). In this film, Jimmy is a head sales clerk at a small store, and he’s corresponding with a girl that he’s never met. Meanwhile, a new sales girl (Margaret Sullavan) is hired on at the store right around the Christmas season, and she and Jimmy Stewart’s characters do not particularly care for each other…or do they? 🙂

If you recognize some of the plot, it may be because this movie was remade twice: once as In the Good Old Summertime with Judy Garland (I like this one, too) and more recently as You’ve Got Mail (Tom Hanks & Meg Ryan – I don’t like this one).

My favorite part: When Jimmy Stewart’s character finds out the identity of the girl he’s writing. Watching him interact with her from then on is funny and sweet and swoon-worthy all at the same time.

1946, Drama/Comedy. There really isn’t another Christmas movie that captures it all for me like this one does. Humor, music, struggle, faith, and hope. Jimmy Stewart as George Bailey is perfect. In the move (if for some sad reason you’ve never seen it), George, in desperation, wishes he’d never been born and miraculously gets the chance to see just what the world would be like without him.

My favorite part: Walking Mary (Donna Reed) home from the dance – “What is it you want, Mary?” and “This is a very interesting situation.” His stand against Potter. When he meets Clarence – “Well, you look about the kind of angel I’d get.” His joy as he runs through the town, shouting, “Merry Christmas,” to everyone and everything just because he’s happy to be alive. And of course, the end, where all of his giving and sacrifice are rewarded.

I also have an Honorable Mention list or an “If I can fit them in” list, which includes Miracle on 34th Street, In the Good Old Summertime, Bachelor Mother, Little Women (1994 version is my favorite), National Lampoon’s Christmas Vacation (Brad has an edited, more family-friendly version), The Nutcracker, Holiday Inn, Home Alone, & A Christmas Story.

I realize that everyone’s list is different, and I might not have mentioned your number one “Absolutely MUST SEE It.” Sorry. As I said before, I like a lot of Christmas movies. But they can’t all be my favorites. 🙂

Speaking of favorites, this week one holly jolly reader will win one of my “Absolutely MUST SEE It” favorite Christmas movies along with three more holiday films.

is a TCM Greatest Classic Films Collection: Holiday, a 2-disc set which includes my #2 favorite – A Shop Around the Corner – as well as three more Christmas movies: the beloved Christmas in Connecticut, the 1938 version of A Christmas Carol, and the cute It Happened on 5th Avenue.  Along with the movies, the prize pack includes a selection of Land O Lakes Hot Chocolate in a variety of flavors. My boys enjoyed helping me taste-test the different options, so they could pick their favorites. 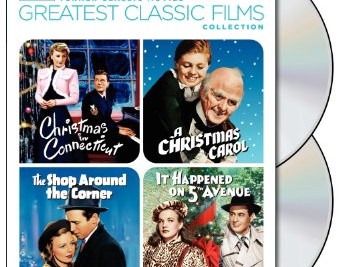 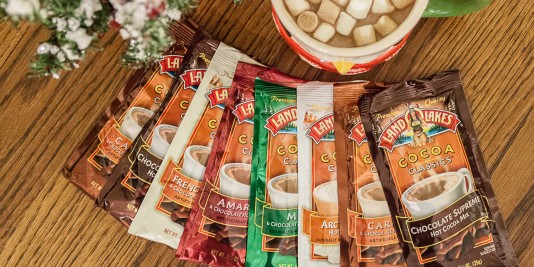 The giveaway starts today and is open until Thursday 11:59pm, with the winner being announced on Friday.

So, did your favorite Christmas movies make my list? What would be your #1 MUST SEE Holiday film?