How I Sabotaged Myself & Made a Bad Evening WORSE 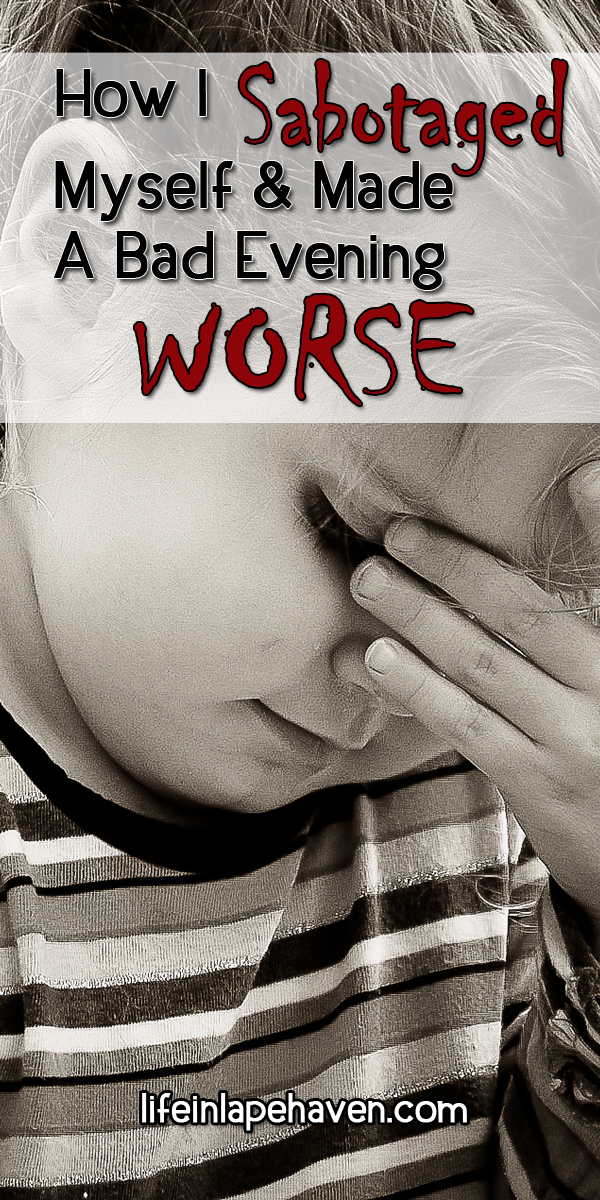 It was Elijah’s first day back to kindergarten after his winter break. It meant we all had to get back into our normal routines, readjusting from our more laid-back holiday schedule.

While we did try to get the boys to bed on time at least the few days leading up to Tuesday, I myself hadn’t gotten much sleep the last couple of nights. Part of it was because of a cold I’m getting over and part of it was staying up to read before going to sleep to help my busy, multi-tasking, always-thinking mind to settle down. As a result, I was operating with a sleep-deficit.

However, the early morning went well enough, despite the 16-degree temperature we faced in taking Elijah to school. Actually, most of the day went fairly well. Josiah helped me gather and start the laundry and then stayed busy with his newly-made play-dough while I worked on the dishes. He even went down for his afternoon nap easily enough, and by the time we picked up Elijah, I was pleased with how well our day was progressing. Sure, I hadn’t gotten to finish cleaning a few of the pans in the kitchen, and I still had a load of unfolded clothes sitting in the dryer, but I was going to work on those while dinner cooked.

I had no idea what was coming, but my lack of rest was not going to help.

In about an hour or two, through a series of accidents and everyday events, my happy Tuesday would turn into the “I just want to hide and cry” chaos that my hubby came home to.

All I clearly remember is that I started working on preparing dinner (Ree Drummond’s awesome broccoli cheese soup) while the boys played nicely together in the living room. I was on my second day of a real “meal plan,” something that I’m trying to implement to help me be (and feel) more organized, so everything was going according to plan. I just needed to chop an onion, some broccoli, and some ham to get going.

I had the onions in to saute when I heard Elijah half laugh, half scream, “Josiah’s in the bathroom.”

At some point during my chopping, Josiah, who is almost 3-years-old and 90% potty-trained, pooped in his underwear and was in the bathroom trying to take his pants off just as I got to him. I put him on the potty (of course he said he didn’t need to go anymore), dealt with the mess, scolded Elijah for having laughed about it the whole time we were in the bathroom, left them playing with their blocks, and went back to dinner prep.

I was in the middle of adding milk and cream to the broccoli and onions when I heard water running in the bathroom. Since that’s never a good sign, I hurriedly put the measuring cup down, which then spilled all over the counter and the top of our gas stove. Grabbing a few paper towels, I tossed it over the mess on the counter, and then sprinted to the bathroom to find Josiah with no pants on, standing on the step stool at the sink, rinsing his underwear under the running water.

He’d pooped again! Only this time he took care of it, sort of, himself, which honestly didn’t help.

Seriously, kid? Twice in less than a half-hour? Didn’t I just put you on the potty??? And you said, “I don’t need to go potty!”

So, once Josiah was cleaned and clothed for the second time, the boys were relocated to the kitchen table so I could see them easier. I finished mopping up the spilled milk (our dog, Vinny, helped with the floor clean up), and I measured out more milk and cream.

At this point, I was pretty frustrated, but the boys didn’t seem to notice because they started that wonderful pre-dinner complaining for food and drink while they are standing 10 feet away from the pot of soup that is cooking. (Because clearly I’m not planning to feed them EVER, right?)

I stirred the soup a bit, then got them both a small drink of juice, and returned to season the soup.

Then Elijah started rifling through my huge utensil drawer, digging out the potato masher and cookie cutters, looking for stuff to use with their play-dough. It might not have been a big deal, but 1) he didn’t ask, 2) he didn’t put the other stuff back, and 3) he actually had his own tools for play-dough AT THAT TABLE already.

So, I had to leave the soup. I asked him to put the things back (probably using short, clipped phrases because I was not a happy mommy), and helped him rearrange the contents of the drawer quickly so it could be shut again.

My patience was running horribly thin.

And then I smelled the broccoli soup…scorching.

And although the boys started fighting about something while I searched for a new pan to transfer our dinner to before it was completely ruined, I ignored them because addressing them in that moment of intense frustration wouldn’t have been wise. My mind was a muddled mess, and I was shifting to running mostly on emotions, which is never good.

Then Elijah complained about the smell. I’m pretty sure I glared at him, while assuring him that the soup was fine, and he was going to eat it no matter what.

With dinner salvaged and another pan to clean later (which just added to my stress because no, I never even had a chance to touch the other pans), I finished cooking and asked the boys to start cleaning up so we could eat.

But they didn’t start to clean up. They kept playing, and I yelled at them, somewhat ferociously.

Because I was irritated with them for not obeying and for causing me more work instead of just letting me make our dinner. I was frustrated with Josiah for not telling me when he needed to go to the potty. I was annoyed with Elijah for getting in to things and for complaining about being hungry while I was obviously having a difficult time cooking. I was beyond my temper over all the difficulties I had had with a simple dinner. And I was tired.

The boys finally started picking up, and I went about cleaning up the counter, including filling my flour canister with the bag of flour I’d had to open during my early soup prep. When the canister was half-full, I readjusted my hold on the bag… and it exploded. (Actually, the bag just tore, but the effect was the same.)

I looked down at the broken flour bag, the flour-covered counter and floor, and then glanced at my flour-covered self in disbelief. 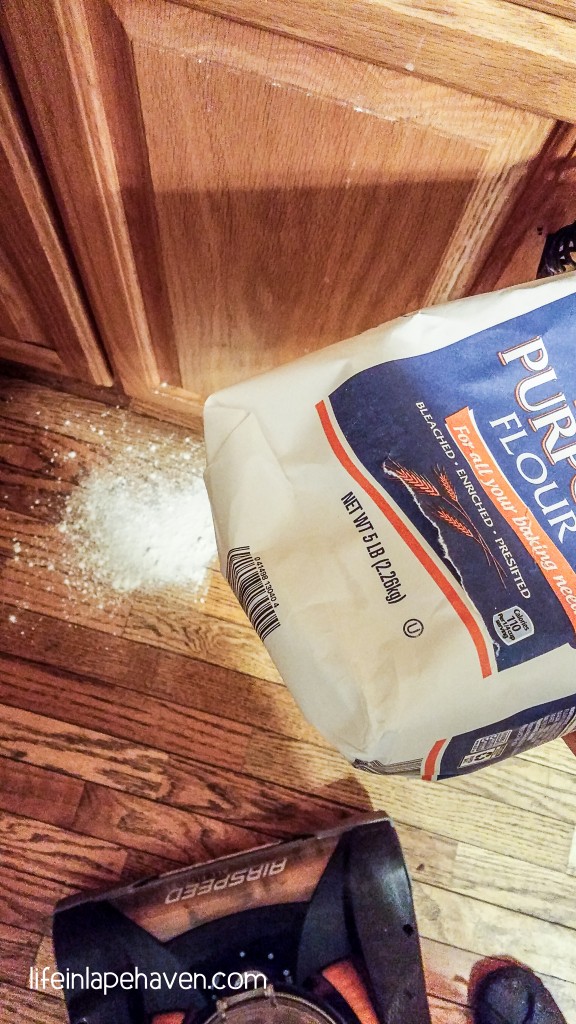 Really, God? What was going on tonight?

Behind me, Elijah started complaining…again.

The woman who turned around on that boy was not the “Mommy” he expected and definitely not the one whose attention he wanted to get.

Seeing that they still hadn’t finished putting away their stuff, I immediately took away their dessert for the night and told them that as soon as they were done with dinner, they were going to bed.

By the grace of God, I didn’t completely snap. I sent them away from me to the living room so I could calm down. And I got the vacuum so I could clean up the flour mess.

By the time Brad got home, the boys were fed, nearly ready for bed, and we were all rather down. There wasn’t a lot of joy or peacefulness in our home. It definitely wasn’t a haven. There was still a hesitant tension in the air, and it was my fault.

Accidents, both potty-related and otherwise, happen – often – especially in a house with young children. Spills, messes, and “I forgot” are an everyday occurrence around here, and honestly, I’m usually the one reminding my husband that our boys are still little, still learning.

No, we don’t want them to get away with disobedience and not being quick to do what we ask, but most of their offenses that evening weren’t bad or in that arena. Had I had a little more patience with the lesser incidents, the major trouble of not obeying could have been dealt with easier.

And many of my difficulties weren’t entirely because of them.

I spilled the milk. I neglected to turn down the burner when I left the stove. I don’t even know what happened with the flour.

We all have those days. The ones where Murphy’s Law is working overtime to make sure that absolutely everything that can go wrong, does. The ones where we should really just stop what we’re doing and pray. Pray against strife, pray against short-tempers, pray for understanding and compassion, pray for patience, peace, and wisdom.

But if I don’t use wisdom and get sleep…then I’m not rested, and I’m already physically tired as I face a crazy day. I will fail to respond properly and won’t have a balanced view of things. In those moments, I tend to react more emotionally and more selfishly. When I’m tired, my flesh is even louder, so sensing God’s nudge in those trying situations is even harder.

As we said our prayers that night, I asked for forgiveness for my harshness and impatience, both from God and from my boys.

Then I went downstairs to get ready for bed myself, and because God has a sense of humor, as I was changing my clothes, I found a large lump in my back jean pocket.

Silly putty, slipped into my pocket by my mischievous Josiah at some point during the chaotic evening and smooshed hopelessly into the fabric because I’d already sat down on it before I realized it.

*Sigh* Yep. It had been one of those days, and it was time to get some sleep.

(Some of you may remember seeing this picture on my Instagram that night.)

Not the best evening for this mommy. After a disastrous hour or so pre-dinner (pretty sure it's turning into a blog post), I end my night by finding silly putty in my back jean pocket, compliments of Josiah. (Special shout out to the grandparents who have him that awesome stocking stuffer.) I'm calling it a night and #praying for tomorrow. #sillyputtypocket #itkindoflookslikeaface #momof2yearold #momofboys #mamasaidtheredbedayslikethis #mommyblogger

A Ridiculously Simple Way to Get Silly Putty Out of Fabric

Let Me Be Singing