Elijah and the Ensemble 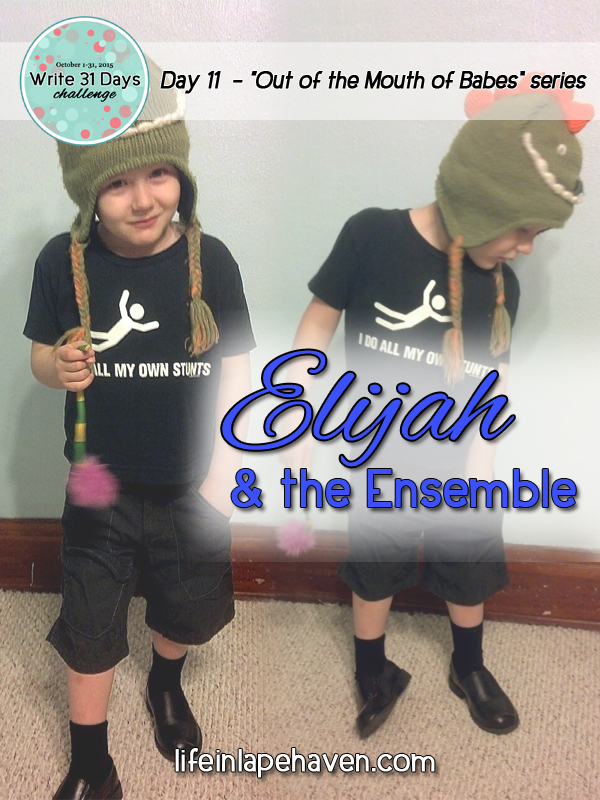 As I’ve already mentioned this past week, Elijah and nap time/quiet time stopped getting along quite a while ago. Quiet Time was instituted when it became very clear that getting him to actually nap every single day was just a happy memory.

His naptime had actually been a futile effort for a few months before it was put out of its misery. I spent much of “naptime” hearing noises in his room, then going up to investigate, then telling him to get back into his bed, and then coming back downstairs until the bumps, squeaks, and thuds started again.

Sometimes, though, he was a bit stealthier in hiding his lack of napping. However, as he has learned, Mommy will always figure out the truth sooner or later, and usually sooner than you want her to. You can’t hide stuff from your moms, kids! (Especially not ones who are listening closely to the Lord. If she doesn’t find out on her own, He’ll reveal it to her. Can I get an “Amen!”?)

One day when Elijah laid down for his nap, he was wearing a long-sleeved t-shirt and jeans. He wanted to leave his clothes on, and I let him. After a book, a prayer, and a hug, I left him upstairs to rest.

Less than hour later, my child came downstairs in an entirely new, and decidedly unique, ensemble. One look at his outfit, and I knew he hadn’t even TRIED to take a nap. 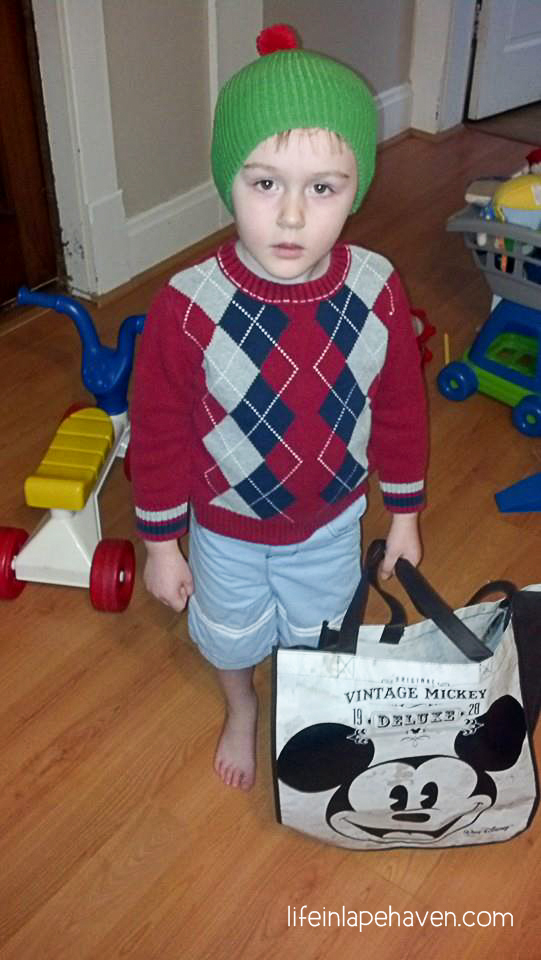 When I asked him what he was doing out of bed so early, he claimed, “I took a good, long nap.”

It was hard to keep a straight face, especially with him wearing a silly little hat that was several sizes too small because it came off a stuffed animal! A stuffed animal that, I might add, was not anywhere near his bed.

When I questioned him, he denied any and all accusations that he might have been playing instead of napping. Uh-huh.

Standing in my living room, I studied his sweater and shorts combo accessorized with the giant Mickey bag, his face with its carefully serious and innocent expression, and did my best not to laugh at the ridiculousness.

He totally thought he could fool me.

Even as I laugh at this silly picture of the boy who tried to lie to Mommy, I can’t help but think about how many times we try to do this as Christians.

No matter how clearly our lives are showing one thing (struggle, difficulties, bad habits, lack of time with God), we can pretend like the best of them. We’ll smile, tell people “I’m fine,” and raise our hands in worship while our mind is anywhere but on God. We hope that the people around us are fooled.

It’s kind of like when we try to take those “Pinterest perfect” pictures to post online. You pick the least messy part of the house to take the picture to make everyone believe that your home is really clean, not realizing that stray sock is smack in the middle of the floor in the background.

The Bible tells us, though, that “the Lord does not see as man sees; for man looks at the outward appearance, but the Lord looks at the heart” (1 Samuel 16:7). God is never fooled by what we say, how we act, or what we look like. He knows us as we are – our flaws, our mistakes, our hurts, our motives, our potential.

Let’s just be real. Let’s just be honest. Let’s be repentant. God isn’t fooled, and chances are, neither is everyone else. Being real gives God the chance to extend forgiveness (If we confess our sins, He is faithful and just to forgive us our sins and to cleanse us from all unrighteousness. – 1 John 1:9), help us correct our errors, heal our wounds, and encourage us in our purpose.

If Elijah would have been doing what he was supposed to, he may have had bedhead, but at least he wouldn’t have had to wear that goofy hat to hide that he didn’t.