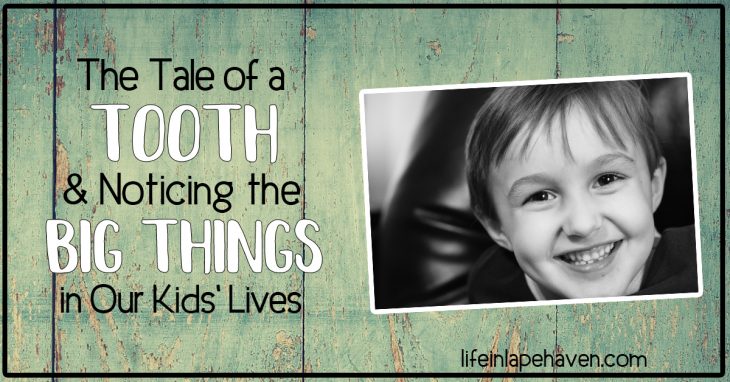 Have you ever had one of those parenting days where you finally catch something that’s been flying under your overworked parenting radar?

Not big, major things, but just, like, “my child has been in those clothes for two days straight” (that has happened – thankfully it was one of the kids who stays home all day!) Or “what do you mean you haven’t been feeding the dog as much as you were supposed to?” (this has also happened and explained why our dog kept grabbing food off the counter that week!)

Well, I had another one of those moments recently. On Monday night, Brad called me into the bathroom where our boys were getting ready for bed, and he asked me, “Have you seen this? Josiah has an adult tooth coming in behind his bottom front baby teeth!”

What? No! I had not seen that.

And when I did, I said, “How have we missed this? It’s almost halfway in already!?!” (Not exaggerating!)

Sure, Josiah usually brushes his teeth by himself, but Brad or I usually double check them just to make sure he did a good job. Somehow, in the last few weeks of life – planning and hosting Josiah’s 5th birthday party and planning and hosting Easter and all the Easter weekend stuff – I hadn’t noticed that big tooth coming in! See that big tooth behind his baby teeth??? (And that dirty face…haha)

Not going to lie… Kind of felt like a bad mom…like a too busy mom…like a “what else have I been missing” mom. Not a good feeling.

Thankfully, Josiah was just excited about the prospect of losing his first tooth soon. (He just turned 5!!!)

So with some lingering mom guilt but a happy little boy, I went to bed, wondering if we should contact our dentist about it. I figured if the adult tooth was coming in, the baby teeth would loosen soon, right?

The story could have ended here, and I could share about how God whispered encouragement to my heart that night and how I felt okayish about not noticing the tooth sooner. And I stopped worrying about whether I missed something else or not. I could tell you, moms & dads, that we all miss little details sometimes. Sometimes we even miss big ones. But “God gives grace to the humble.” (Proverbs 3:34)

And parenting – it’s a humbling experience. I don’t think we realize it when we’re starting out, but whew – we learn quickly that we have a lot to learn. And that we need God if we’re going to make a good go of it.

That’d be a nice way to end my little “mom moment,” but then you’d miss the rest of the story, some of which actually is kind of entertaining in hindsight.

So, the next day at nap time, I asked Josiah if I could check those little teeth.

Sure enough, both of them wiggled easily. That made him very excited, and me, well, a little sad. The thought of my little guy losing his sweet little perfect smile and entering into that awkward time of snaggled-tooth grins and half smiles for the next few years…sigh. I definitely wanted to make sure we grabbed some good pictures soon.

Thankfully, I’d already gotten a few over Easter weekend because just before dinner that evening, Josiah went into the living room, and a second later we heard a thud and a high-pitched scream. Apparently, he had tripped over the boys’ play carpet and hit his face on Isaiah’s booster seat (not sure why it was in there).

I met him halfway to the kitchen, and when I saw his mouth bleeding, I knew.

One baby tooth was missing.

As I led him to the bathroom, trying to calm him down, he helpfully spat that (bloody) little tooth into my hand. #glamorousmomlife

In the chaos that followed, I set the tooth by the bathroom sink and had Brad getting me a wet rag to clean Josiah’s face and Elijah fetching us a cup for water for his brother to swish with.

It took a few seconds for Josiah to settle down, both because he’d nearly bit a hole through his lip (ouch!) and because he was in a panic about losing that tooth. (That was NOT how he’d planned for that to happen.) That red spot is where he hit his tooth into his lip!

As I tried to soothe him and handed him the water cup that Elijah had placed by the sink, I glanced over at the tooth. Only it wasn’t there.

I managed to catch a glimpse of it as it went down the drain. (Good job, Mom! *sigh*)

Before Josiah could spit into the sink and lose that tooth for good, I shoved him over to the toilet so he could spit there. (Yeah, it was a gross few minutes in our household.)

And as if the insanity wasn’t enough at the moment with him still bleeding and crying, Brad yanking things out from under the sink to rescue the tooth, Elijah just getting in the way in our tiny bathroom, and Isaiah happily trying to get to the plunger and toilet brush – when he leaned over to spit, Josiah tilted his full cup of water with him, spilling it all over the floor in the process. At that point, I just laughed. I looked at my husband in disbelief, and all I could say was, “Seriously.”

Shaking my head, I ushered Elijah out into the living room to play with Isaiah, while I cleaned up the floor and Josiah, and Brad successfully retrieved Josiah’s first lost (then found, then lost and found again) baby tooth.

Once a semblance of order was restored, I snapped a few pictures on my phone of Josiah’s new smile, and we went back to finish dinner. Again THIS could be the end of the tooth saga, and it would be enough. We’ve had our “encouraging” heart-sharing and a bonus funny “chaotic family” anecdote. You can all relate to some part of it and have a little laugh at my crazy night.

As the night wore on, I noticed that Josiah was no longer excited about his tooth coming out. He didn’t want me to send any pictures of him to Grandma (although he did tell her when she called). He didn’t even want us to talk about it. And when I asked him if I could tell family about it via Facebook, he was adamant that he didn’t want people to know. So I respected his privacy. (He did give me permission to write this story, though, since it has been a few days.)

For one, his mouth was sore from the fall and from where his tooth almost went through his lip. I think that kind of scared him, and it hurt.

Secondly, I think he was disappointed. He didn’t get to wiggle the tooth and anticipate it coming out, at least not for longer than a few hours. And he didn’t get to try to pull it on his own.

In addition to that, he was feeling self-conscious, knowing that he would look different now. He’s the boy who doesn’t want to mess up his hair once we’ve fixed it in the morning, and he’s always so particular about what he wants to wear. So, having a missing tooth and a new smile were going to take some getting used to.

The last reason, though, surprised me, and it didn’t come out until the next day.

When I checked his other tooth, the neighboring bottom front tooth that also was loose, got knocked in the fall, and is now barely hanging on itself, he said, “I just want to stay a little kid.”

While kids usually are all excited to get bigger and grow up, if I remember from when I was little, it CAN be a bit intimidating, too.

For Josiah, in the last month he registered for kindergarten, which he is somewhat nervous about, and he turned 5. Then this month, he’s suddenly losing teeth.

To us, as adults, that might not seem like much, but to a little guy – that’s a lot of transitions.

And while I might not have noticed that big tooth coming in, I can make sure that I notice these big feelings that Josiah is navigating and do my best to help him adjust to the changes, as quickly as they are coming.

So, although we would have taken this tooth thing even slower had he not fallen, we’re taking it as slowly as we can because I don’t mind keeping him a little kid a little bit longer.

UPDATE: Even before I could get this post finished, that second little front bottom tooth decided it was done, too. Josiah didn’t even have to work at it or try. It came out when he started eating dinner last night. This time, though, Josiah was thrilled! For tips from a dentist on what do to when pulling baby teeth, you can check out this article, The Dos & Don’ts of Pulling Baby Teeth.

The Last Time He Called Me “Mommy”

3 Things I Know About Becoming a Mother