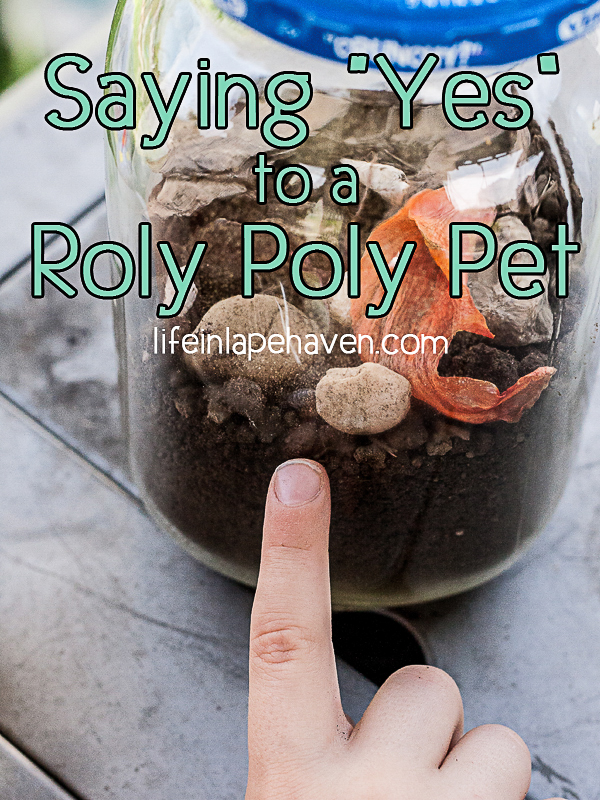 Our 5-year-old son, Elijah, is fascinated with bugs. He has been for at least the last few years. He started off like most little guys, trying to catch the ants crawling on the sidewalks outside or watching, mesmerized, as a spider moves along its web. Around the same time, someone gave him a book on bugs, which we have read numerous times over, and his love for bugs was set. We now have several books about bugs that have all been read numerous times over.

So when Elijah came in the other day excited about catching a roly poly (also known as pill bugs), I was not surprised. Nor was I surprised when he wanted to keep it for a pet. Since I was fairly certain that a pill bug would not be a good pet, and since I was totally certain that I did not want him carrying the bug around in the house, I was quick to inform him that he needed to take it back outside immediately. I did not want him to keep a roly poly as a pet. 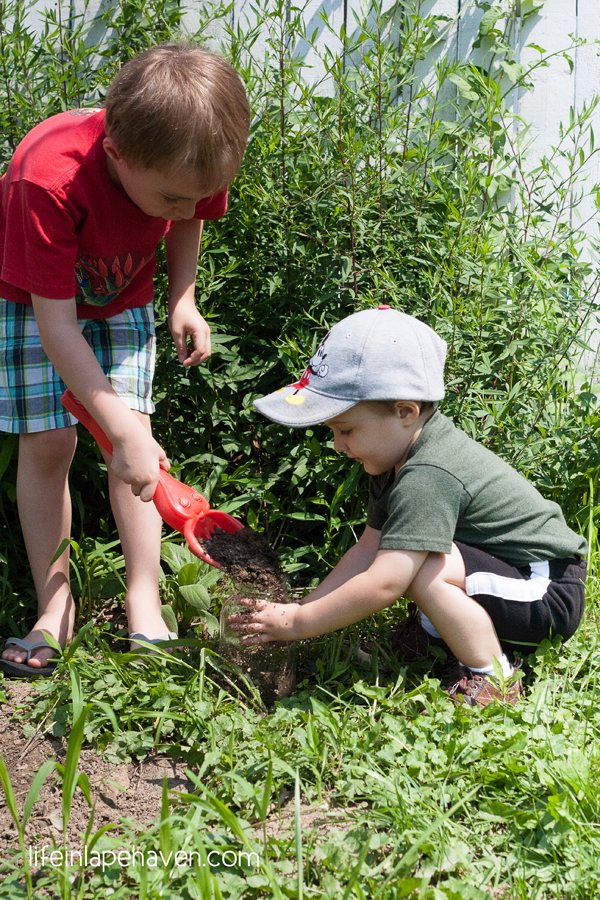 He agreed to take it out, but he really wanted to keep it, so he asked about keeping it in his cup of dirt outside. (Last week he wanted to grow his own garden and pulled weeds up to plant them in a cup of dirt which I let him keep in a flower bed near the door. Yes, his curiosity keeps our lives interesting.) I gave him permission to keep it overnight in his dirt-filled cup, but that was it. No pet pill bug.

This morning Elijah had to check on his roly poly as soon as he finished breakfast, and when he came back in, he needed to know what he should feed the bug. Since I didn’t know exactly, he asked me to look it up online, going so far as to try to sound out the word “what” so he could type “what do roly polies eat” in the search bar. 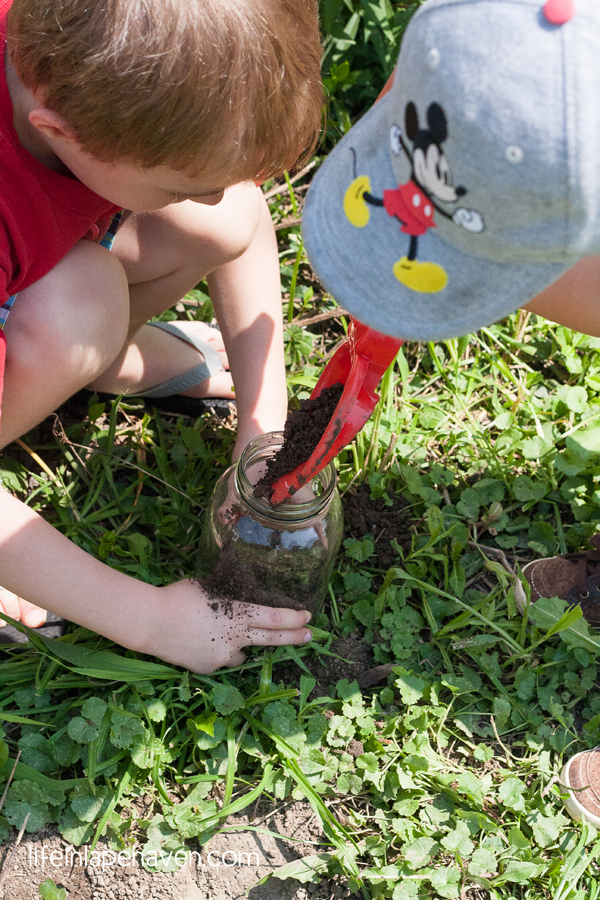 Guess what? Now I not only know what they eat (mostly decaying plants and animals – yum), but that people actually do keep them as pets. Really.

Seeing his devotion to caring for this little bug and his bright-eyed excitement over it, I had a change of heart. What would it hurt for him to have a roly poly as a pet since a person really can keep them as a pet?

The more I thought about it, the more I realized something.

Sometimes as parents, “no” comes out so easily. I mean, most of my day is spent saying “no” to things that can only be answered with “no.”

“No” is at the ready nearly every time I open my mouth, for the safety and training of my children. However, I was reminded today that sometimes, “no” comes out without me even thinking about it. Without me even considering a “yes.” Without me actually considering what my “yes” or “no” will mean to my child.

So, I thought about his request to keep a roly poly as a pet. No matter how ridiculous that sounded to me, to him it was important, an adventure, a chance to learn more about bugs. As long as he keeps it in the container and doesn’t forget about it, how could I just deny him something so small that would bring him so much little-boy joy?

I had no real reason.

When I told Elijah that people can have the bugs as pets, and that he could too, his day was made. His enthusiasm and happiness were contagious. Even Josiah, who currently HATES all bugs and freaks out whenever he THINKS one might be one him, was anxious to see the bug and make its home. 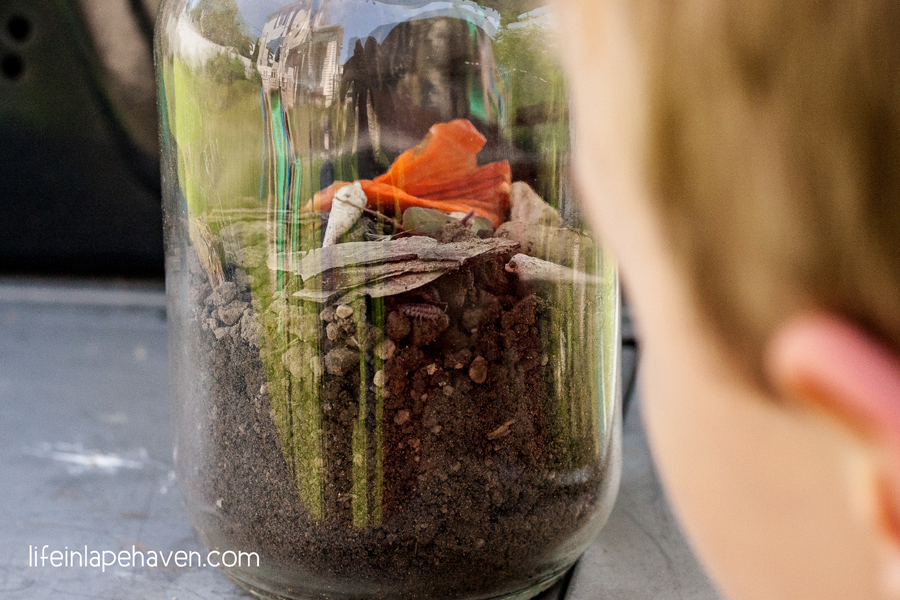 We found a large, clean Mason jar. Then he and Josiah took turns digging dirt to fill it up. They added some rocks, a piece or two of mulch, a couple tiny seashells that Elijah claims will be “good for roly poly beds,” and a wilted flower petal for food. A quick spritz of water (according to our research, pill bugs need cool, moist dirt), and the bug habitat was ready.

When he went to move his pet into its new home, Elijah was thrilled to find two roly polies in his dirt cup, instead of just the one he put there. We don’t know where it came from, but Elijah doesn’t care. All he knows is that Mommy has said “yes” when he expected a “no,” and he is not wasting it!

Embracing the Moments of Mommy Sadness

The Last Time He Called Me, “Mommy”

For Such a Time As This