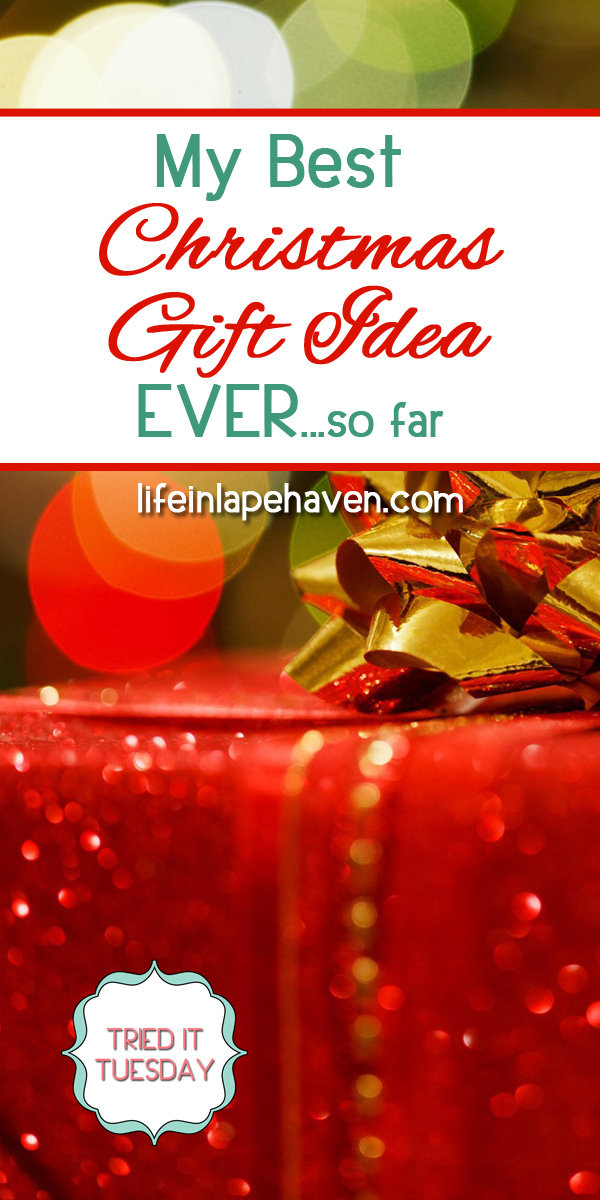 Sometimes the best Christmas gift require a little advanced planning. My “best Christmas gift” idea was one of those, but it was completely worth it. It’s an original Tried It Tuesday idea born out of need. Here’s why.

Any parent of two or more children can tell you that making the jump from being a one-child family to a multiple-children family is daunting. The adjustment from one to two (or more, if you get blessed with multiples) is a big one.

However, the adjustment for an only child to go from “it’s just me” to “it’s my little brother/sister and me” is just as big and can be harder for little ones to navigate.

When Elijah learned that he was going to be a big brother, he was just over two years old, and he was ecstatic. He liked babies, so for him, it was going to be tons of fun to have one to play with.

Brad and I did our best to prepare him for the changes and talked to him about how his little brother was going to need Mommy and Daddy and Elijah, too, to do things for him for a while because, as a baby, his little brother wouldn’t be able to do them on his own yet. I made sure that Elijah knew that if he ever felt lonely for Mommy or Daddy, all he had to do was ask us for a hug or come sit with us. 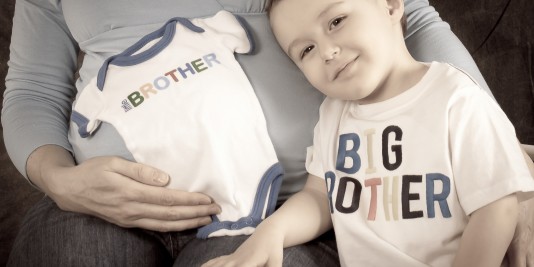 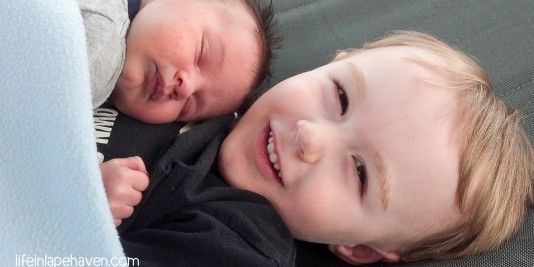 Even with all the preparation, we still had some rough days, and there was a point, after the initial “I’m a big brother now” stage, where it seemed that Elijah was constantly getting in trouble, especially for being defiant. I’m sure part of it was just the natural phase of becoming more independent (he was 3), but the timing didn’t help.

It was heartbreaking because not only did I feel guilty for having to spend so much of my attention and time on Josiah when I knew Elijah could still use some Mommy time, but my sweet, joyful Elijah was becoming moody and difficult. I remember telling Brad that I missed “our Elijah.”

It was a situation that we prayed about constantly and one for which I was always on the lookout for a solution.

Then one night while I was up nursing Josiah, God gave me an answer, or at least part of it. He gave me the seed of an idea that took root so quickly that I couldn’t go back to sleep until I’d written it down, even though it was four in the morning.

I was going to write a book for Elijah, one all about him and the many reasons I loved him. Since it was later in November, I think, or maybe even already December, I wanted it to be one of his Christmas gifts.

In my mind, I could see a book with illustrations and knew exactly how the wording would be laid out and what the font would look like. However, with a limited budget and timeline, I decided to do the next best thing – use pictures that I already had and match them to my story.

(By the way, this post contains affiliate links, which means I get a small percentage if you make a purchase through the link, at no extra cost to you.)

Having used Shutterfly for a few photo album-style photo books in the past, I decided to see what photo book themes they had that might work for Elijah’s book. Thankfully, it didn’t take long to find one that worked really well, and I began laying out the story. 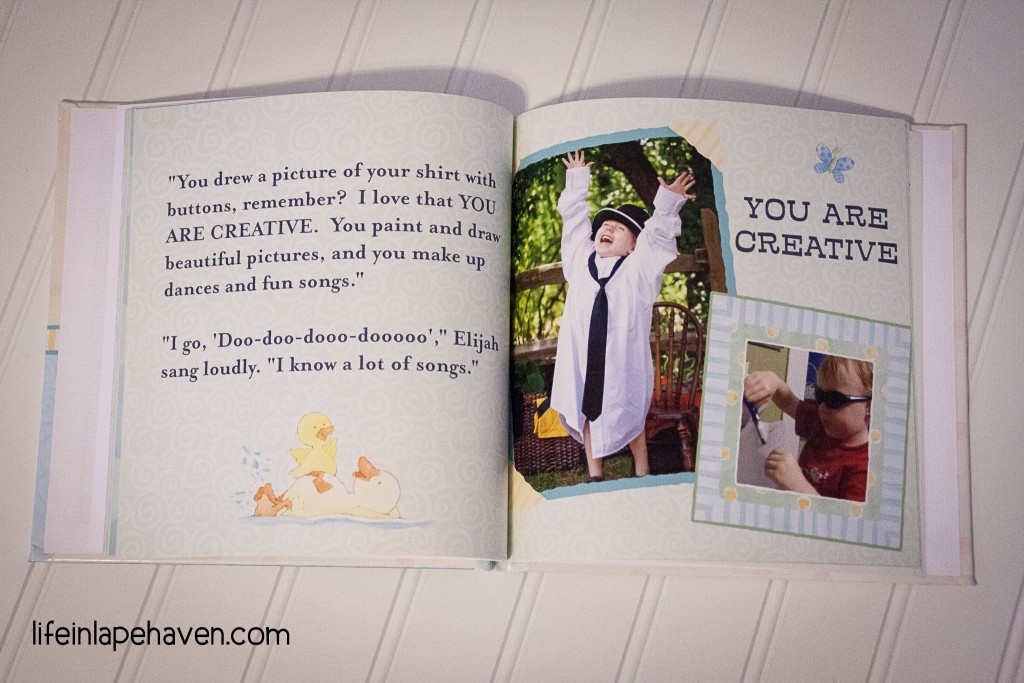 The story was really simple. I was recounting our day with Elijah at bedtime and using the events of the day to illustrate all the things that I love about him, such as his creativity, his kindness, and his courage. The final pages also reassured him that even when he wasn’t kind or brave or obedient, we still loved him very much because God has given him to us. I titled it, “Why I Love You.”

On Christmas morning, it was the gift I was most looking forward to him opening, and I was praying that it ministered to his unsettled little heart.

From the moment he saw it, he loved it. A book all about him, written by his mommy, was a big deal. The words were exactly what he needed to hear.

That book instantly became his favorite. For weeks we were reading “Why I Love You” every night and sometimes during the day. 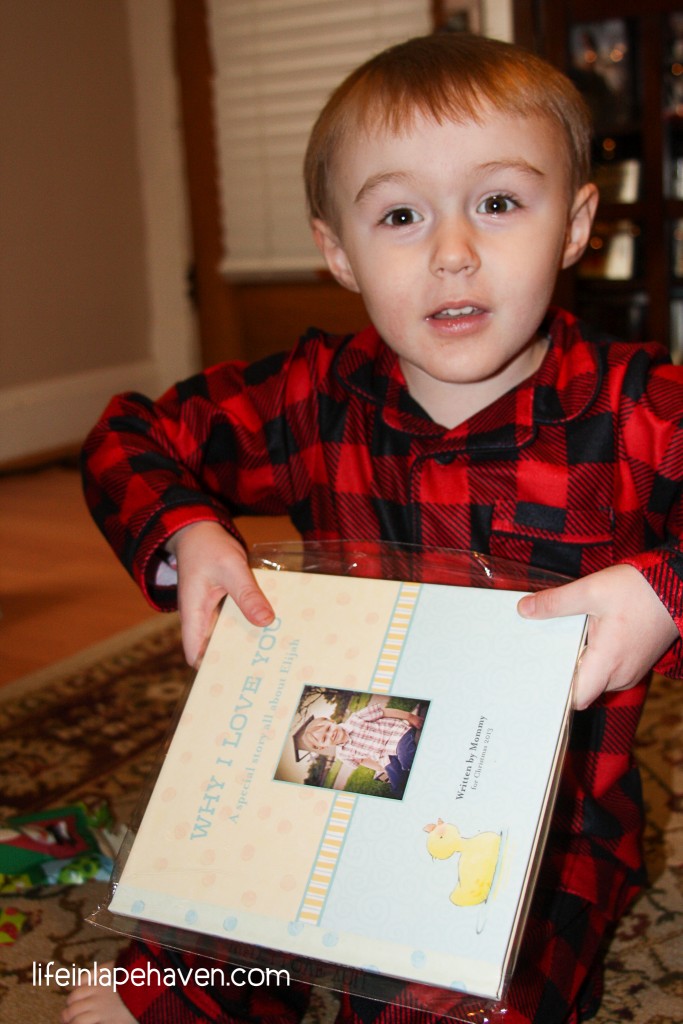 And my sweet Elijah slowly reemerged, calmer, more secure, and more willing to listen and help. (He was still stubborn and independent – that’s just him, but it was more manageable.)

I am confident that God gave me the idea and the story because He knew what Elijah needed from us and how he would best receive it.

The book became the best Christmas present that year for all of us.

Since my first personalized book was such as hit, the next year I created two more books: one for Elijah and his cousin Christian that was all about their friendship and an ABC book for my little Josiah that featured words relating to him and our family. Each book contained pictures that I had taken throughout the year, so it served not only as a fun storybook about them, but also as a way to share our memories. 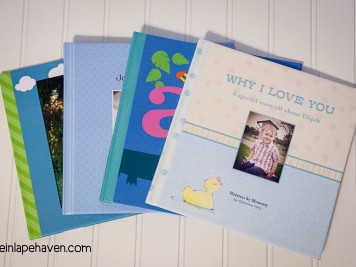 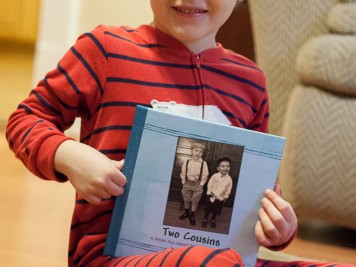 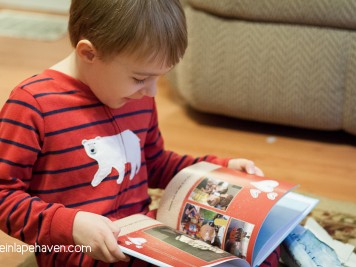 In addition, Shutterfly often features great coupons for everything photo-related, including prints, calendars, and the photo books. By planning ahead and having my stories ready for when they had special offers, that year I ordered three books and only paid full price for one of them (and I don’t think I had to pay shipping on that one)!

Feel free to borrow this idea. I’m sure it’s not unique to me, but the cool thing is, when you write your own stories, your book will be completely original and special for whomever you write it!

What is the best Christmas gift you’ve ever given someone?

Why We Don’t Need More This Christmas

Why You Can’t Give Jesus a Dinosaur: Christmas According to My Children