The Courage in God With Us 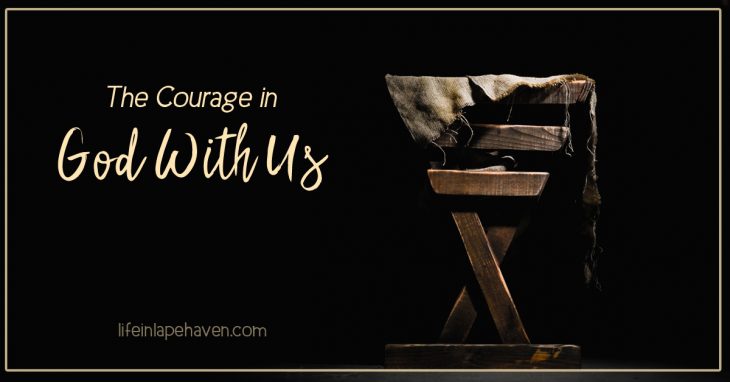 In the middle of October I was driving our two older boys to the first practice for our church’s children’s Christmas program.

Elijah had auditioned a week or so earlier, and having earned a part in the cast, he was especially excited.

Josiah, on the other hand, was acting rather miserable. We’d had a busy week, and at not-quite-six-years-old, he usually needs more rest than his older brother, so I thought he might just be tired. But when I asked him what was wrong, he surprised me by saying that he didn’t want to go to practice.

I reminded him that he needed to practice in order to be in the program, but he said,

Again I was surprised because at the auditions, even though he was too young to really try out for a big part, he’d eagerly followed Elijah in to the other room when they asked for people who wanted to audition for a solo.

So, I dug a little deeper with him.

“Why don’t you want to be in the program? I think you’d have fun.”

To which he replied, with a little quiver in his voice, “It would make me nervous.”

Knowing that Josiah is my more sensitive child, one who is more shy and struggles at points with confidence, his fear hurt my heart.

Because I knew he would do so well – he’d try hard, learn the songs and motions, and have a great time being a part of it all – if he only gave it a chance.

So this is what I told him:

“It’s okay to be nervous or a little afraid. I’m pretty sure everyone will be. It’s a big thing to get on stage in front of lots of people.

But guess what? Sometimes it’s good to do things that we’re afraid of. Because you know the good thing about being nervous or afraid? It gives you a chance to be brave. You don’t need courage when you’re doing something you aren’t scared to do. So it’s okay if you’re nervous because I know you have courage.

Plus, when we decide to be brave and do something scary, it gives us a chance to trust God, and we give God a chance to prove that He’s right there with us, to help us do what we can’t do by ourselves.”

Josiah gave me a quiet “Okay,” and we went to practice.

I didn’t realize the impact of our little conversation, though, until the next week at practice, when he was one of the first kids to volunteer to sing a small line in one of the big numbers. His excitement and pride over being given 3 words to sing by himself (although he does sing them 7 times throughout the song) was precious, and his diligence to practice and work on singing louder and clearer – yes, just those 3 words – has made me so proud of him.

It’s also made me think about how so much of the Christmas story required bravery and courage. Each person who was a part of the events of Jesus’s birth had to decide to trust God even when they were nervous, afraid, intimidated, or even in danger. Mary, Joseph, shepherds, wise men – God called them all to rather overwhelming tasks. They bravely chose to be obedient, to submit to God’s plan, to have faith that He would be right there with them to help them do what they couldn’t do on their own.

And yet, in some ways, Jesus showed the greatest courage of all.

While I don’t think God actually fears anything, and yes, He knew the outcome and the reason, He also knew what it would cost Him. Humbling Himself, the King of Kings, to leave the gloriousness of Heaven to come dwell among us – the lost, sinful, and broken–in our fallen world. He came loving us and longing for relationship with us, knowing that despite all He would sacrifice, He would be “despised and rejected” by so many (Isaiah 53:3).

And still He came because He wanted to be Immanuel, God with us. (Matthew 1:23)

With us – His Holy Spirit in us – so that when we face challenges, trials, or heartache, He can strengthen us, equip us, and guide us like never before, helping us do things that we can’t do on our own.

With us, so that when He calls us to follow Him, we know He’ll never leave us or forsake us, and we can trust in His good plans for us (even if they intimidate us some times).

With us, so that we can know Him, His grace, and forgiveness and have an eternal relationship with Him, and we can boldly approach the throne as children of God.

With us, so that we have the power to be His witnesses, sharing His love with others as courageously as He did.

And “with us,” so that when a tender-hearted little five-year-old chooses to step out and be brave despite his nerves on the day of his first Christmas program, God will be right there beside him, ready to prove His presence with overwhelming peace and confidence, strengthening Josiah’s faith and trust in the One he’s so proudly singing about and celebrating.

“Do not fear, for I am with you; do not be afraid, for I am your God. I will strengthen you; I will help you; I will hold on to you with My righteous right hand.” – Isaiah 41:10

Nobody Is Grading Your Holiday

Our Simple Approach to Family Devotions 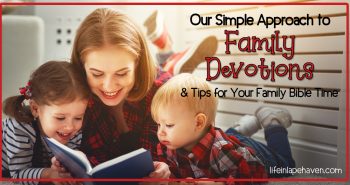 Our Simple Approach to Family Devotions