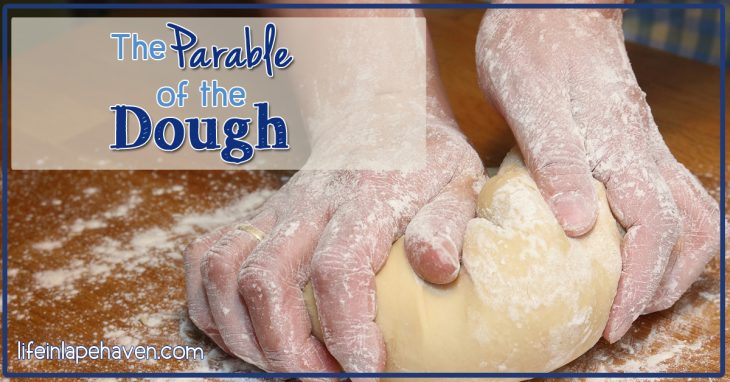 The other day I was working on dinner, preparing some unleavened flatbread for Brad and me for our Daniel fast. I had made this bread before, and it worked out wonderfully.

However, this time as I mixed it up in my Kitchen Aid, it wasn’t coming together as easily, so I decided to knead it the rest of the way by hand. I had kneaded my previous batch, too, so I didn’t think this one would be much different.

Every time I tried to knead the entire batch together, little pieces would crumble off. So I picked them back up and worked them in, and as I did, other pieces would fall. I’m not sure why, but this dough seemed a little tougher, even though I did exactly the same thing as with my other batch.

As I continued to knead it, the dough continued to break apart, rather than become more elastic and pliable, as it should.

Knowing that it needed some more moisture, I dribbled a little olive oil on it and continued my efforts. The oil helped, but it didn’t soften the dough as much as I had hoped. Since I didn’t have all day to play with it, and my hands were getting a little tired, I decided that I was just going to have to roll it out and see how things went.

Without the elasticity the dough needed, rolling it out into eight little circles of flatbread was a chore. I had to apply lots of pressure while using the rolling pin, so much so that I feared cracking the wood of it.

I finally resorted to half rolling and half pushing across the dough with the rolling pin, just to get it thin enough to bake. It wasn’t a pretty sight. The toughness of the dough resisted the process, causing it to crack in places, and the piece to end up as an odd, jagged sort-of-circle shape.

Toward the end of the tedious process, my hands were getting sore, and I was getting frustrated. It was such a fight.

As I worked a particularly stubborn piece, leaning my weight onto the rolling pin as I shoved it along the top of the dough, God said, “This is how it is when the clay resists the Potter.”

I paused and stepped back to look at the dough (and to give my hands a break.)

This dough felt so much different from the batch I’d made before. It was denser, tougher, and less flexible, and now it had crackles from the rolling pin stretching and pulling it, instead of being a smooth, pliable, and even circle of soft dough.

As I went back to rolling it out, I thought about how people sometimes fight against what God wants to do in them and how much harder that makes the process for them.

When we face difficult circumstances or when God is trying to stretch us and mold us more into what He’s created us for, rather than being flexible and pliable under His touch, sometimes we push back or stubbornly stand still, refusing to follow His nudging. Were we soft and elastic as we should be, His touch would feel much more gentle and the stretching less painful.

Looking at the last few pieces I needed to roll out, I was tired of fighting them.

I almost wrapped them up and put them in the refrigerator to mess with later (thankfully God doesn’t do that to us!). However, I decided to try to help them out a bit more, and I added a little warm water to my hands and worked it into the first dough ball. 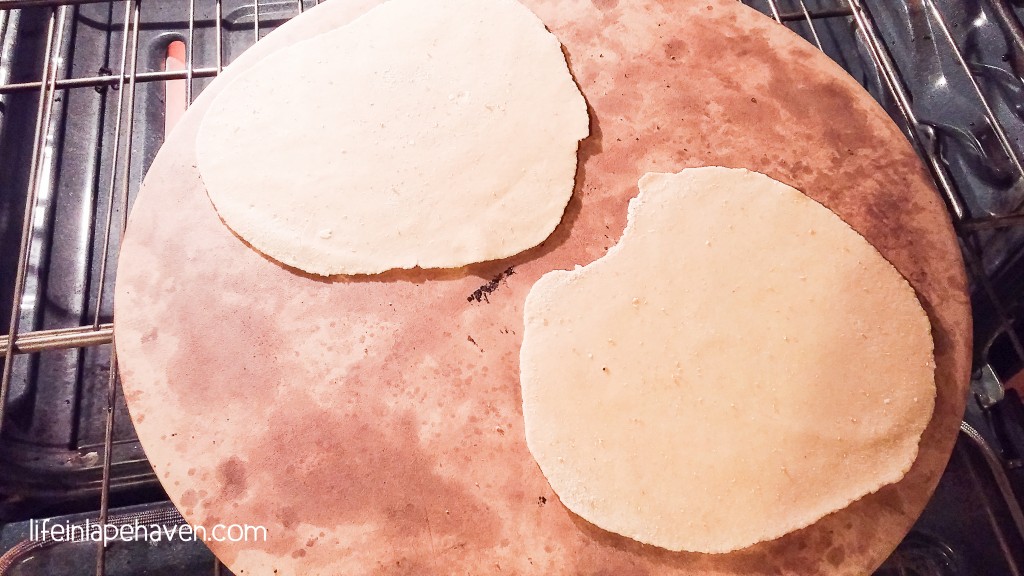 How the dough should have looked, but didn’t.

Once the water was absorbed in, the dough was noticeably more workable and soft. Apparently I should have added a touch more water to the whole batch in the beginning, but I was in a hurry, trying to get dinner underway while keeping my ears attuned to my boys playing in the other room. Lesson learned. I did the same thing to the remaining pieces.

(I know, some of you bakers were thinking that from the beginning of the story. I should have, but I was just hoping it would come together.)

As I rolled out the slightly easier pieces of dough, I continued to think about God’s analogy of the tough dough and us, as His children.

It was us, those who claim to want to become more like Him that sometimes fight the work He’s doing to make us that way.

Going back over what I did with the bread, God pointed out other things, too.

Like the oil, and how even applying the oil to the bread didn’t make it as tender as it could be, even though it helped. In the Bible, oil is usually a symbol for the Holy Spirit. However even though He can draw us and woo us, and we can be in His presence, our hearts have to be receptive.

We have a part to play in being the workable, moldable dough for God to shape and use.

For my dough, I added water. That made the difference in the end.

Being in the Word keeps our hearts receptive to God’s leading, God’s nudging, and God’s molding us. It shows us Who God is and how He’s called us to live. As we spend time in God’s Word and apply it to our lives, we become more like Him. Doesn’t the Bible tell us we are “transformed by the renewing of our minds”? (Romans 12:2)

But when we don’t have a clear picture of Who He Is and what He wants us to be, we’re more likely to resist those changes and to fight against the Potter as He works the clay from a lump into something beautiful and useful.

God’s Word gets to the heart of the matter, literally. Hebrews 4:12 says, “For the Word of God is living and active, sharper than any two-edged sword, piercing to the division of soul and of spirit, of joints and of marrow, and discerning the thoughts and intents of the heart.”

Do you want to be shapeable and transformed into what God wants you to be? Stay in the Word. Get it deep in your heart. Spend time in God’s presence. (You need both water and oil to make a decent dough.)

As for my flatbread…well, it wasn’t as pretty as the last batch, but it was still edible and tasty. As soon as I had baked them all, I stored them in a plastic bag together and sealed it. Keeping in the moisture while they cooled softened them all up a bit more, which was just what I wanted.

(Maybe that’s a good analogy for staying in fellowship with other believers, iron sharpening iron and all that.)

So, I encourage you to be soft dough today. Let God move and work in your heart so He can roll you out easily into exactly what He’s shaping you to be.

A Life Lesson from My Backyard

Growing Up on Manna