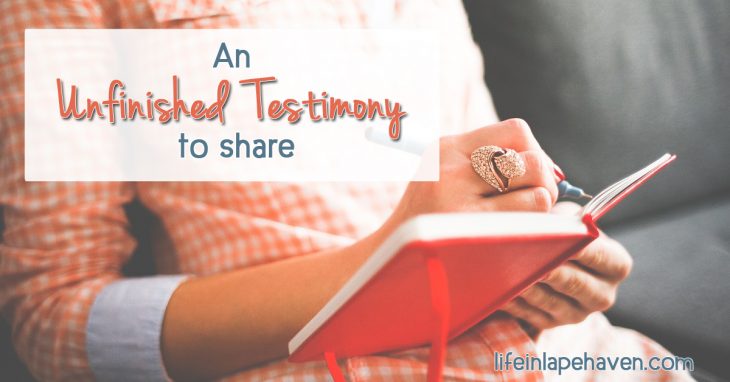 The other day I was brainstorming ideas for things I could write about and coming up with a mental list of potential blog posts. There are several personal stories that I’d like to tell, but they haven’t yet come together enough beyond a sentence or a few thoughts here and there.

One of those is sharing about my sister, whom my family adopted when I was just out of high school and she herself was married with two children. As I was thinking about it, I knew that that story wasn’t quite ready to be told yet, and part of that reason is because Jodi’s testimony about God bringing family and restoration to her life is a long one, and it’s still being written.

And that’s the thought that gave me pause.

Because if any of us have a true testimony of God in our life, it’s still being written. It’s a continuous story of the work He’s doing in us day by day. Growing up in church, it always seemed as though when someone was asked to share their “testimony,” it was more about when they started following God, and usually it would be one of three stories:

1 – The Horrible Sinner with the Horrible Past: These were about how a person had once lived in complete Godless darkness, practicing every kind of evil imaginable (usually including drugs, alcohol, promiscuity, and the other “big” sins), until someone shared God’s love with them, and the person made a decision to repent and follow Jesus. They were always tremendous examples of God’s amazing grace and His power to make someone brand new.

2 – The Prodigal who Returns Home: A person sharing this “testimony” had usually grown up in church, had a foundation of faith, maybe followed God or perhaps just pretended, but as they got older, they left the church and any relationship with God. Their return to the Lord reminds us of His unfailing love and forgiveness and how He longs to restore everyone to Him.

3 – The Lifelong Christian:  This is another person who most likely grew up in a Christian home, going to church, and they began serving God when they were young and have remained faithful since, never really doing “bad” things. This was me. And when I was younger, for myself and others like me, this “testimony” sometimes felt as though it wasn’t really a testimony. There were no dramatic moments, no brushes with death or danger, nothing flashy.

However, as I’ve gotten older, I’ve come to the conclusion that this kind of story is just as powerful as any other, sometimes more so, because God saved me from even experiencing all the bad things. A relationship like this points us to God’s faithfulness, His Spirit’s empowering us to fight temptation and stand strong, and His still small Voice guiding us on the right path when we follow closely. (This is not to say that we’ve never sinned or failed. We need forgiven just as much as anyone. Our story is that we’ve continued to pursue our relationship with God through everything, and He has never let us down.)

BUT HERE’S THE THING: No matter which way your relationship with God began – rescued from a nasty past, returning to your first love, remaining faithful to the Lord – that’s not your testimony, at least not all of it. It’s just the beginning of it.

Your love story with your spouse isn’t just about the wedding …at least I hope not. That’s just the starting point, the “Once Upon a Time” opener.

The best part of the story is the relationship and building a life together toward “happily ever after”: all of the struggles and triumphs, the growth and change, the fighting and making up.

If someone asked me about my husband, I’d probably say, “Brad is such as sweet husband and good daddy. The other day he…” And I’d tell them about how he helped me around the house or had the boys giggling at his goofiness.

If all I had to share about my husband was from when we first met or our wedding, which was nearly 10 years ago, people would wonder about our relationship. They would wonder if we even had one.

A testimony isn’t “that one time that God did something for me,” and it’s not a list of all the bad stuff you did that God has forgiven, or just about when you got saved, or even when God healed you or provided miraculously for your family’s need.

All of those things are part of it, but your testimony should be growing. It’s more a list of all that God has done and is doing in your life because He is good and loving and forgiving. The longer you’ve served Him, the longer that list will be.

But no matter how long that list gets, you’ll still have an unfinished testimony to share. We all do.

Philippians 1:6 – “And I am certain that God, who began the good work within you, will continue His work until it is finally finished on the day when Christ Jesus returns.”

Confessions of a Preacher’s Kid

Growing Up On Manna